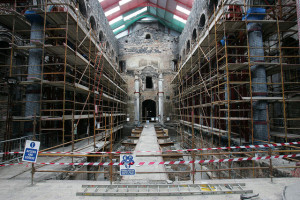 Almost one million euro has been received by St Mel’s Cathedral in Longford in voluntary donations which has enabled the restoration project incorporate disability-friendly lifts and other enhancements.

Speaking to CatholicIreland.net, Fr Tom Healy, Administrator of St Mel’s, which was burnt to a cinder on Christmas morning 2009, said there was a great sense of exhilaration that the five-year target was going to be fulfilled this Christmas.

In the New Year, another six to eight weeks may be spent snagging and tidying things up but “all told we have met our target,” the priest said.

RTE will televise two Masses from St Mel’s this Christmas which will showcase the results of one of the biggest ecclesiastical restoration projects in Europe in recent times.

Explaining that St Mel’s Cathedral is “at the very heart of Longford” and a beautiful old classical building, Fr Healy recalled that on Christmas Eve 2009, “We had had a wonderful celebration of midnight Mass. It was just an almighty shock to be woken in the middle of the night and told the cathedral was on fire. We just stood in the streets literally crying – helpless as we watched the flames break through the roof as it succumbed. So it was a time of enormous shock for everybody in Longford.”

However, under the leadership of Bishop Colm O’Reilly and Fr Healy, along with all the members of the building committee, the art procurement committee, the architects and design team, the contractors and engineers and the Friends of St Mel’s, that initial decision to go down the route of restoration appears to have been an inspired one.

Nonetheless, there were many headaches along the way. Of the €30m restoration work, Fr Healy explained that for a long time there was a lot of uncertainty as to whether the cathedral was adequately insured to cover this.

“To this day we don’t know the final cost until we wrap up final accounts with our builders,” Fr Healy explained. 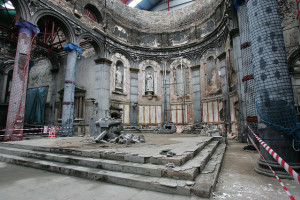 “We have put in two lifts, we have improved audio visual systems, provided kitchenettes and toilet facilities. There are a number of rooms at the back and at the front which in the past were a bit inaccessible because they were accessed by difficult stairways. They are serviced with lifts, kitchenettes and toilets and are much more accessible. The hope would be that in time to come they would be great resource rooms for various parish groups.”

The cathedral this Christmas will also showcase restored Harry Clark stained glass windows. The original windows were scorched and shattered in the fire.

A stained glass image of St Patrick ordaining St Mel which was given to Bishop Colm O’Reilly by President Mary McAleese as a gift the day after the fire will also figure prominently.

According to Fr Healy, on the day of the fire, he received texts and emails from people around the world, notably from the US and Australia.

It is hoped that some of the people who expressed their concern will tune in for the Christmas services online through ChurchServices.tv (CSTV). 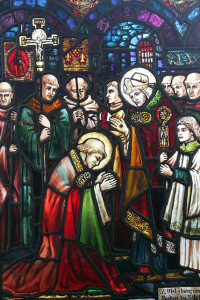 Tony Bolger of CSTV told CatholicIreland.net, “Churchservices.tv (CSTV) feels privileged to partner with St Mel’s Cathedral to live stream their ceremonies to their parishioners living locally and those who have moved further afield.”

“This powerful digital technology extends to all parts of the globe. It can be viewed on PCs/Laptops and all mobile devices. This means that no one should miss important Cathedral and parish events, irrespective of where they live or even if they are travelling.”

High quality digital live streaming of the Christmas services will be of great benefit not just to those confined to home, nursing homes or hospital but also those who cannot return to Longford for this Christmas, he said.

He added, “Technology closes the distance anywhere on the globe with the use of high quality digital live streaming transmission with www.churchservices.tv”

For those more comfortable with their TV sets, the live stream will be available on the local Longford town cable TV station – http://www.crossan.ie/index.php/cable-television-overview/ or through a Set Top Box supplied by CSTV.

For the longer term he said, “Once you have access to broadband, you can participate in any live service, and replay it later. The system facilitates an integrated recording program for the services which the parish deem worthy of storage for future viewing.”

This will mean that wedding and funeral ceremonies can be viewed from anywhere in the world.

According to Tony Bolger, “Weddings and funerals would be ceremonies which would benefit from such a recording as many parishioners have moved away and would not necessarily be available to travel for family occasions.”

He explained that people now live in time zones which make it difficult to view live and recorded events are very beneficial. Being able to download a recorded ceremony to keep as a keep-sake is a very useful facility also.”

Video overview of the fire to the commencement of the restoration project courtesy of Catholic Communications Office can be seen here: http://bit.ly/13laVuA