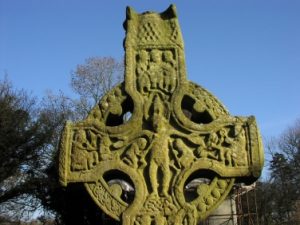 The Durrow High Cross Committee in Co Offaly has warned that funds allocated for the development of access to the monument may not be enough.

For the past number of years, the Durrow High Cross Committee have been campaigning to improve access to the site off the N52 road network.

Offaly County Council has not included the High Cross in any signage as they contend access to the cross from the road is dangerous.

This week, over €170,000 was allocated for the works as part of the Government’s rural recreation projects scheme.

It is hoped that the money will improve both access to the cross and allow for increased signage to promote the monument’s location.

However, chairperson of the Durrow High Cross Committee, Helen Bracken, says signage is needed in the area but she estimates that proper access to the cross would cost much more than the Government is pledging.

Speaking to Midlands 103FM she said, “When you come into Co Offaly and you see the new signs that announce Ireland’s Ancient East and you pass through the village of Durrow and there is no signage you are not sure that that amount of money would resolve the signage difficulties from the main road.”

“They may be able to provide some level of access that may enable promotion and maybe some signage.”

The High Cross of Durrow dates back to the 6th century.

In the middle of the 6th century a monastery was founded here by St Colomba. The monastery is famous for an illuminated manuscript, written there in the 7th century, and known as the Book of Durrow.

West of the Church is a fine High Cross, the East face features Christ with sceptre and cross-staff, associated with the last judgement, and on his left a piper and David with his harp. On his right David and the lion are depicted.

The bottom of the shaft on the East face shows the raised Christ flanked by two angels hovering above St Peter and St Paul.

The central panel is a beautiful celtic interlace and the top panel bears the sacrifice of Isaac. The west face as usual has the Crucifixion on the head and also the arrest of Christ.

In Spring 2004, the Government bought Durrow Abbey and High Cross.