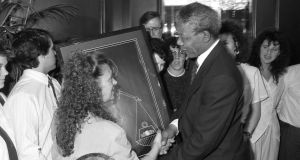 Some of the Dunnes Stores anti apartheid strikers may attend the funeral of former South African president, Nelson Mandela, next Sunday.

The eleven’s refusal to handle South African goods during the apartheid years led to strike action which lasted almost three years and was praised by the former South African president.

In all, the ten women and one man kept up their picket up for two years and nine months while also taking a drastic cut income as they survived on strike pay.

A number of trade unions here are reported to be trying to organise to get some of the eleven to Johannesburg to represent Ireland.

“The trade union movement believes it would be a fitting tribute from the Irish trade union movement to send the Dunnes Stores strikers, who took such a brave stance on the issue of apartheid, to the funeral of Mr Mandela in South Africa,” Mandate general secretary, John Douglas, said.

In 1984, Mary Manning was the member of staff who triggered the picket when she was suspended by management for refusing to deal with a customer’s basket which contained a South African grapefruit.

The 21-year-old was joined by another ten workers in upholding their union’s directive on apartheid South Africa’s goods.

In the early 1990s, Nelson Mandela met some of the strikers on a visit to Ireland and thanked them for their solidarity and a street was named after Mary Manning in Johannesburg.

In 2008, an official plaque was erected in Dublin to honour the workers’ principled stance.

Speaking to the Irish Times about the funeral, Mary Manning said, “It would be a lovely way to say ‘goodbye’.”

She said their protest was “at the end of the day about achieving what Nelson Mandela and the people of South Africa were fighting for.”

She and her former colleagues recalled the support they got, but also the abuse they endured from both non-striking colleagues and the public.

In an interview with the Irish Times, one of the eleven recalled, “People were asking why we were striking for ‘niggers’. Co-workers passing the picket would be physically abusive, push us around. They’d drop their tea bags out of the canteen window above, onto us.”

An invitation to meet Archbishop Desmond Tutu in London in 1985 was a “turning point” as it “raised the profile of what we were fighting for nationally and internationally. That was hugely important.”

The strike was lifted in April 1987 when Ireland became the first country to ban South African goods.