A Flower–Harvest Festival which has contributed to building a sense of community in Dunlavin is returning for the fourth year and is expected to attract much-needed visitors and trade to the town.

“Two years ago the event surpassed our expectations yet again and the response of all those who took part and visited both churches was unbelievable,” stated the organisers.

“Over the previous three festivals we have had some wonderful participants that have competed in World Flower Shows – such as Marie O’Leary – (who is one of our main judges), Richard Delmer, Adrienne Thompson, Christine Hughes, Mary Hayde, Felicity Satchwell and our very own Ann Heatley. This is a great event which incorporates our whole community.” 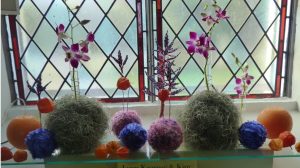 Everyone contributes, from the experts who compete at the highest level to the beginners. Schoolchildren provided flowers in wellies along the path from the church gate to the front door.

As well as the stunning floral creations inside both churches, there are also exhibits in the grounds of each, and at the local businesses and homes on the main streets in Dunlavin, Co. Wicklow.

Pauline Allen of the Flower–Harvest Committee told catholicireland.net that relations have always been good between members of the Catholic St Nicholas of Myra Church and St Nicholas Church of Ireland. An extra special bond was formed when the Catholics were invited to use the Church of Ireland premises when their church was closed for renovations. 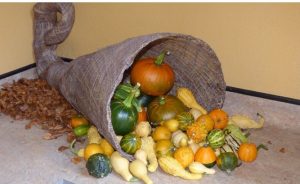 Fr Douglas Malone arrived in the parish in 2010. He was interested in flowers, as was Pauline Allen and her sister. So when it came to starting a Harvest celebration, flowers came to the fore. There was a Flower–Harvest Festival in 2011 and 2012 and every second year since.

“We (Catholics) wouldn’t have done it as much as the Church of Ireland – they do a harvest festival every year,” said Pauline Allen.

She and the other organisers have seen every shape, size and style of arrangement during the four years, from the spectacular to the simple. On the question of which impressed most, Pauline Allen said they always favour participation, referring to some who “might have never touched a flower [and yet] make the effort, like a school child, to come in and go to the trouble [of creating a floral arrangement].”

She added that “The community coming together is the biggest thing out of it, or working in groups, or helping someone who needs a hand to do it. It has brought … community back into our area. To me that is the most important bit.” 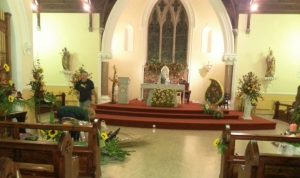 Dunlavin is not the only Catholic parish or church group to hold harvest/Halloween celebrations this year. For example, in the Diocese of Meath, Navan Parish held the All Saints Party 2016. Members of families dressed up as saints, holy men, women and children, and angels, with the theme “yes to God”.

The children and their families also joined in a #PeacePossible4Syria prayer in solidarity with communities who are damaged by war and live in constant fear.

Likewise, the Legion of Mary was involved in the All Saints Family Party on Halloween night, 31 October in Trim Parish Centre. Family members dressed up as their favourite saint and they were treated to games, treats and music in a safe atmosphere.

On Saturday 29 October, the Famine Landscape Project hosted a one-day seminar entitled ‘Samhain Harvest: Food, Famine and Growing Within’ at the old Falcarragh Famine storehouse. The seminar addressed the effects of inter-generational trauma and the Famine, and issues around food sovereignty according to Waylon White Deer. Along with Máire Nic Fhearraigh, Waylon is an organizer of the Afri Choctaw Irish Famine Landscape Project.

Another speaker, Michael O’Loughlin,  author of Trauma Trails from Ireland’s Great Hunger: A Psychoanalytic Inquiry (2012), posed the question: “What if all of us of Irish descent are emotionally orphaned, fleeing an apparently unmourned past that leaves us with a gaping hole, cut off from the narrative strands that would allow us to stride confidently into the future?”