At the invitation of Church of Ireland Archbishop Michael Jackson, Archbishop Diarmuid Martin preached for the first time at Evensong at Christchurch Cathedral on the eve of the feast day of the Church reformer and peacemaker. 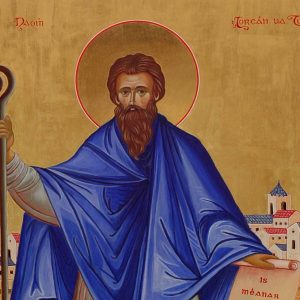 The event saw several new pieces of church music being premiered: an anthem, ‘Omni Opere’ (‘all the work’), composed by David Bednall, and two Hymns to St Laurence based on a 13th century biography of the saint known in his native Irish as Lorcán Ó Tuathail.

In his sermon, Archbishop Martin said: “Laurence travelled across a war-torn Europe to attend the Third Lateran Council in Rome in 1179. He tried to negotiate a peace between the different Irish political groupings. Henry II refused to meet him as he was angry with Laurence for having damaged his reputation with the Pope and because of Laurence’s popularity with the Irish people. Prevented from returning to Ireland, Laurence went to the Augustinian Monastery of St Victor at Eu in Normandy and died there on 14 November 1180. Only 45 years after his death he was canonised by Pope Honorius III, at the instigation of the people of Eu, who were so struck by his piety in the final few days of his life.”

Archbishop Martin said that “Laurence carried out his reform of the Church in Dublin addressing up front the corrupt and violent culture and behaviour of the Dublin of his time. Today in Dublin there is new violence and disregard for human dignity. Human life has become cheap for criminal gangs who wish to impose their power on others. We know that violence if not the answer. It never has been. Violence and gestures of disrespect for individuals are not the signs of democracy; they are not the signs of respect for human dignity.”

He said that the saint “had a great influence on the political situation of his time. He was not however a political figure. He was a Churchman and a man of God. It was his integrity as a man of God rather than any political agenda which permitted him to have influence in society. He was a true spiritual leader who tried to witness to the care of Christ for his people and for the society in which they lived.”

He continued: “In an increasingly secularised Ireland, how can faith contribute today to the process of grounding the values which should inspire our modern society? I have often mentioned the question which Pope Benedict posed to me ten years ago on my first official visit as Archbishop to him: ‘Where are the points of contact today between the Church in Ireland and those places where the future of Irish culture is being formed?’ I know that Archbishop Michael and I share a common concern around this challenge and share a realization that this is a challenge for the Churches not just individually but ecumenically.”