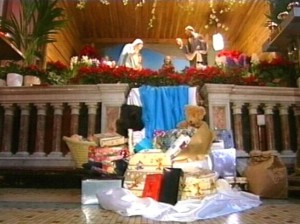 Dublin’s Pro Cathedral is appealing to anyone who received a Christmas gift which they are not happy with or don’t need to donate it to their unwanted Christmas gift appeal for the homeless.

The annual collection of unwanted gifts at St Mary’s in the centre of the capital has continued to grow year on year and allows people to re-gift those presents they do not need and put them to good use.

Gifts can be brought to the Pro Cathedral and placed at the crib in the cathedral until 6 January, the Feast of the Epiphany.

Crosscare, the social care agency of the Archdiocese of Dublin, takes the gifts and redistributes them to homeless people – holding back many for Christmas 2017.

This year, demand for services continued to increase, made worse by the lack of suitable housing options available.

During 2016, Crosscare provided 127,750 bed nights to over 1,600 people in six residences for people experiencing homelessness – in Dun Laoghaire, and in the Dublin 1, 7 and 8 areas.

Services range from emergency accommodation and short-term housing with support services to helping people find their own home.

Forty Crosscare staff have been working around the clock in these days in the six homeless services and extra staff are also on standby to help with families who may need assistance at short notice.

Among the services run by Crosscare is the Brú Aimsir cold weather service which opened in December 2015.

Two years ago, Archbishop Diarmuid Martin made St Mary’s Hostel available to Crosscare to run a 24-hour service providing supported temporary accommodation to individuals who are homeless with complex support needs. That service is operating and full.

Canon Damian O’Reilly of the Pro Cathedral praised the generosity of parishioners who have given so much to homeless charities already this month in a series of seasonal fundraisers at the cathedral.

Money was raised for Crosscare, the Peter McVerry Trust and the Capuchin Day Centre.

He said the staff of the Pro Cathedral were delighted to be able to run the unwanted (and unopened) gifts appeal again this year. The Pro Cathedral is open every day this week from 10 am until 5 pm.

Separately, the Archbishop of Dublin and Glendalough expressed disappointment on Christmas Eve over the failure of the Minister for Transport to respond to his personal appeal for help in rescuing one of the capital’s biggest Christmas charity fundraisers, which has been decimated by Luas works. 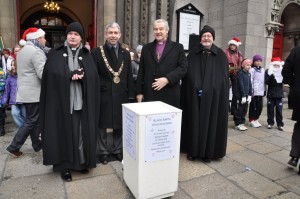 This year’s Black Santa appeal saw contributions drop drastically – up to 50% – due to Luas works barriers which make crossing Dawson Street to St Ann’s Church in the heart of the capital nearly impossible.

According to organisers of the appeal, who are based at St Ann’s Church, footfall was significantly lower this year compared to previous years due to the traffic and pedestrian disruption caused by the Luas works.

Archbishop Jackson told the Irish Independent, “Last year we raised a record breaking €40,000 and as things stand this year we are at no more than 50% of this figure.”

Canon David Gillespie of St Ann’s was assured last October that the Luas barriers would be gone in time for Christmas week.