Dublin’s ePilgrimage to Knock attracts more than 11,000 in online congregation 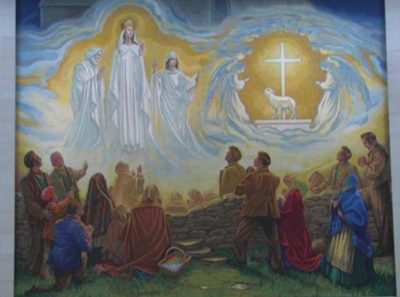 The Apparition Mosaic in Our Lady’s Basilica at Knock Shrine

The first diocesan e-pilgrimage to Knock is being hailed a great success, with more people logging in to join the Pilgrim Mass live yesterday than watched the Easter Sunday Mass at the shrine or the Divine Mercy Sunday Mass a week ago.

The event was chiefly promoted as a Mass for e-pilgrims from the Dublin Archdiocese, but it was also an online substitute for two Irish-language pilgrimages that were due to take place on Saturday: Oilithearacht Muintire na Gaeltachta and Oilithearacht Cumainn na Sagart.

As a result, there was plenty of Irish used in the liturgy, perhaps more than ever before in a Dublin diocesan pilgrimage!

“I am delighted, absolutely delighted, with how it went,” said Rev Gerard Riley, a permanent deacon based in Donaghmede, who was one of the chief organisers of the event, along with Fr Richard Gibbons, parish priest of Knock and the sole celebrant of yesterday’s Mass.

“I’ve had several phone calls since and it was tremendously well-received,” said Gerard. “A lot of people commented on the prayerful and reflective atmosphere. And I must say that having the Irish really added to it. Fr Richard has lovely Gaeilge!”

Out of sight of the camera, the Knock parish choir provided musical accompaniment, with Fr Richard assuring viewers that the choir members were dispersed to ensure social distancing. The Apparition Mosaic behind the altar provided a magnificent backdrop to the celebration.

Reflecting on the gospel story of the road to Emmaus and the disciples recognising the Risen Lord at the moment of the breaking of bread, Fr Richard said: “The Eucharist is at the heart and core of our Christian life. That is why it is so very weird to be here in an empty basilica, which should be full, on a beautiful Sunday afternoon on the Third Sunday of Easter.

The live online audience yesterday was the biggest yet for a Knock Mass, with 11,257 live viewers recorded.