Culture Night to explain role of priests in 1916 Rising 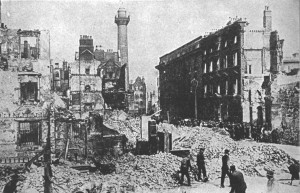 To mark Culture Night 2015 in the capital, the archdiocese of Dublin will this Friday hold an exhibition of documents, seen for the first time, which show how priests in the city ministered to the injured and dying during the 1916 Rising.

Twenty priests from ten parishes were involved in ministering to those caught up in the events of Easter week on both sides of the divide, including a curate, Fr Edward Byrne, who would go on to become Archbishop of Dublin.

Among the historic documents from the Diocesan Archive is an account of how over 40 people sought refuge in Dublin’s Pro Cathedral when fighting broke out in the city centre.

All around the Cathedral buildings were ablaze and the group was forced to stay inside the “Pro” for three days.

Meanwhile, the priests serving in the Pro Cathedral continued to come and go from the building to be with the wounded and dying.

One curate, Fr John G. O’Reilly, ran from the Pro Cathedral to Wynne’s Hotel through streets raked with gunfire from all sides to attend to a wounded man who was badly injured.

Fr Peter Monahan stopped looting at Jacob’s factory, where people were making off with ammunition, revolvers and clothing.

“Fr Peter Monahan arrived at Jacob’s factory and offered his assistance. He was speaking with Fr Aloysius of Church Street when they heard a loud noise, similar to a bomb exploding. One of the volunteers told them a crowd of looters had broken into the office on Bishop Street. Fr Monahan and Fr Aloysius went through the factory, with difficulty, as a water pipe had burst and was had flooded the offices. A window had been broken and the looters were heading out onto the street. Both priests climbed up to the window and addressed the people, pointing out their scandalous conduct. They asked the people to go home and allow the work of peace to continue. Before doing so many gave up what they had taken which included rounds of ammunition, revolvers and clothing. These were returned to the volunteers. The priests then left and went back to ministering to the wounded and dying.” 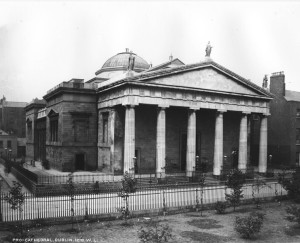 Jervis Street hospital quickly filled with the wounded and it was the busiest hospital in the city centre during the week of the Rising.

A priest was in attendance at all times to cater for the many religious needs of the wounded and dying.

In the statement given to the Bureau of Military History by Molly Reynolds of Cumann na mBán, who was based in the GPO area, she said Fr John Flanagan was actively involved in ensuring the wounded arrived safely at Jervis Street hospital.

Fr Flanagan later returned to the hospital and told them of the surrender. He secured a Military Pass for Molly saying she was at the hospital on his instructions and the officers let her go home unimpeded.

Fr Richard Bowden, administrator of the Pro Cathedral, ensured that clergy were always available. He stayed there constantly through Monday, Tuesday and left on Wednesday morning when curates, Fr Edward Byrne and Fr Joseph Mc Ardle took over.

The violence caused the then Archbishop of Dublin, Dr William J. Walsh, to write to the faithful in Dublin on 25 April 1916 warning them, “In the time of unprecedented excitement and danger through which our City is at present passing” to take to heart the warning issued by the Lord Lieutenant of the danger of frequenting the streets or public places or of assembling in crowds.

Fr Eugene McCarthy of St James’s Church officially attended each of the fourteen executions of the leaders of the Rising at Kilmainham Jail “being taken from bed each morning at 4am”.

On the morning of Joseph Plunkett’s execution, Fr McCarthy was taken earlier to marry the prisoner and his soon to be widowed fiancée Grace Gifford prior to execution. The sight of James Connolly’s bloody death, strapped to a stretcher leaning against the wall, left an indelible impression on the priest.

Also among the newly released documents are letters from the British General Maxwell asking for the removal of “rebellious priests”, Alice Stopford Green seeking clemency for Roger Casement and Fr Laurence Stafford speaking about being the last Irishman in Frongoch, the internment camp innorth Wales where those involved in the Rising were sent after surrender. 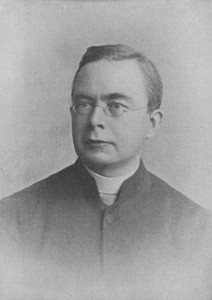 The clergy were fearless in their duties travelling through the worst of the fire-swept zones where the insurrection was at its height. Tributes to the priests were paid by both combatants and civilians alike.

General Sir John Grenfell Maxwell (1859-1929) arrived in Dublin on Friday, April 28, 1916 after receiving orders from the British Minister for War, Lord Kitchener, to quell the Rising and pacify Ireland.

He immediately declared martial law. By then much of O’Connell Street was in flames.

The first proclamation issued by Maxwell on taking over command in Ireland was: “Most rigorous measures will be taken by me to stop the loss of life and damage to property which certain misguided persons are causing by their armed resistance to the law.”

He is recorded as warning, “If necessary, I shall not hesitate to destroy all buildings within any area occupied by rebels, and I warn all persons within the area now surrounded by His Majesty’s troops, forthwith to leave such areas.”

Maxwell would only accept unconditional surrender from the rebels and blamed political weakness for the situation in the first place.

He was “left to his own discretion” by the British Prime Minister, Herbert Asquith, in ordering the executions at Kilmainham and gained infamy from his grave mishandling of the shootings. Maxwell returned to England later in 1916. After being stationed in Egypt, he retired in 1922 and died on 21 February 1929.

In 1916, Kilmainham Jail was in the parish of St. James’s. The official prison chaplains were the clergy based at St James’s and Hubert O’Keeffe, sacristan, assisted at many of the ceremonies.

In ‘Parish of St James, James’s St, Dublin – Celebrating 150 years 1844 – 1994, a memoir by Hubert O’Keeffe’ the sacristan recalled, “In the stirring times of 1916 and its aftermath, the clergy of St James’s Church were called upon to minister to the Catholic prisoners confined within the jail. As clerk, it was my duty to accompany the priests on their visits. After the Rising the leaders were brought to Kilmainham and were soon tried and executed. Fr Eugene McCarthy officially attended at each execution being taken from bed each morning at 4am. The prisoners having been placed against the wall and the firing party having fired, his duty was to anoint the body where it fell.

“On the morning of Joseph Plunkett’s execution he was taken away earlier than usual and told he was to perform the marriage ceremony of the prisoner and Grace Gifford prior to the execution.
Mrs Plunkett afterwards visited him in the presbytery, during which time the place was raided by the military.

“In giving a description of James Connolly’s execution Fr McCarthy told me that the prisoner, who was in a bad condition, elected to stand like the rest but failed. He was then tied to a chair but slumped so much that he overbalanced. Finally he was strapped to a stretcher and placed in a reclining position against the wall.
The sight left an indelible impression on Fr McCarthy. Describing the scene to me afterwards he said: “The blood spurted in the form of a fountain from the body, several streams shooting high into the air”. 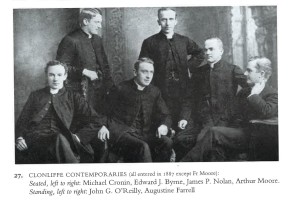 Dublin priests including Fr Edward Byrne (front row second from left) who was a curate at the Pro Cathedral in Easter Week 1916 and gave succour and food to 40 people forced by the violence to take refuge in the cathedral. He later become Archbishop of Dublin. Also in the pic, Pro Cathedral curate Fr John G. O’Reilly, (standing – left) who braved raging fires and artillery and gun fire as he ran from the Pro Cathedral to Wynne’s Hotel to attend a wounded man.

“After the storm of executions had passed it was arranged to have Mass in the Richmond Barracks, where most of the rank and file were being held captive and in Kilmainham. By degrees the number of prisoners dwindled until we eventually had Mass for the last time in 1916 for William Partridge, who was far advanced in TB and who died the following week. The jail then closed until the advent of the Black and Tans.”

The priests from Westland Row spent a lot of time at the National Maternity Hospital, Holles Street, which found itself caught up in the hostilities.

Fr MacNevin found it necessary to remain at the hospital during the Rising while Frs O’Reilly and Fleming ran errands of mercy in other parts of the parish. The biggest problem was in maintaining food supplies.

Fr O’Reilly and Fr Fleming ministered to those in need during and after the Mount Street Bridge battle.

By Wednesday the military had secured the area. The nearby hospital, Sir Patrick Dun’s, was filled to overflowing with wounded from Mount Street and Holles Street made the decision to open its doors to casualties.

In the meantime, Fr O’Reilly had gone to Boland’s Mill under cross-fire to attend to dying Sinn Feiners. After the surrender, most of the wounded were transferred to St Vincent’s by Irish Army Corps ambulances.

The ambulances were also used to carry bread from Boland’s to the maternity hospital and flour to the dispensary. From there it was given to hundreds of starving people over the four day period.

On Friday evening, Dublin diocesan archivist Noelle Dowling will give a series of talks explaining the context and background of these and other invaluable documents from the Archive from 1916.

Archbishop Diarmuid Martin will be in attendance on Friday evening and from 6pm staff from the Archives will be on hand to expand further on the context and background to the papers.

For those living in the immediate area, there is information on resident from Drumcondra, Clonliffe and Glasnevein who fought in 1916.

A spokesperson for the archdiocese of Dublin told CatholicIreland.net, “It is really is a unique opportunity to access one of the most important Irish archives.”

Clonliffe Culture night will also include free talks and illustrations on religious art with Fr Damian McNeice, who will focus on Marc Chagall’s paintings of bible subjects.

The evening will also mark 30 years since the foundation of the Dublin Diocesan Music group who will perform recitals of sacred music.

The Dublin Diocesan culture night begins in Holy Cross Centre, Clonliffe Road, at 6pm on Friday evening and all events are free.