Dublin to mark World Day of Prayer for all Creation 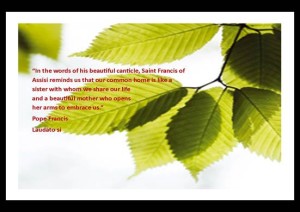 Archbishop Diarmuid Martin will be joined by the leaders of other Christian Churches in Dublin next week to mark World Day of Prayer for all Creation.

Following the publication of Laudato Si’, Pope Francis announced that this day would take place on 1 September.

“It offers to individual believers and to the community a precious opportunity to renew our personal participation in this vocation as custodians of creation, raising to God our thanks for the marvellous works that He has entrusted to our care, invoking his help for the protection of creation and his mercy for the sins committed against the world in which we live,” he said.

At his general audience yesterday, the Pope stated “In a communion of prayer with our Orthodox brothers and with all persons of good will, we want to offer our contribution to overcoming the ecological crisis that humanity is experiencing,” he said.

On Tuesday 1 September, the ceremony in Dublin will include readings and reflections on Laudato Si, music from Vivaldi’s Four seasons, with Ellen Cranitch and Denise Kelly, Psalms of Praise for Creation and Thanksgiving as the Harvest approaches.

That day in Rome, Pope Francis himself will lead a special liturgy to launch the first World Day of Prayer for the Care of Creation in the Catholic Church.

The liturgy, which takes place at 5pm in St Peter’s Basilica, will be attended by bishops, priests, religious and lay people.