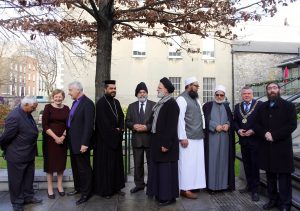 Dublin’s Lord Mayor has said the city’s new Interfaith Charter is a seed for other cities in Europe and the world to show how people of different faiths can live and work together in a harmonious way while practising their own religious beliefs.

Launching the first Dublin City Interfaith Charter at the Mansion House on Tuesday, Cllr Brendan Carr expressed condolences on behalf of the people of Dublin to the people of Berlin over Monday night’s terror attack in the German city.

Dublin’s first citizen told the assembled Christian, Muslim, Jewish, Buddhist and Sikh representatives that it was “fitting” they were “standing together shoulder to shoulder to ensure that such an evil act never happens in our city”. But he also expressed concern that racism, xenophobia and intolerance are “creeping” into societies around the world.

The new charter deals with issues such as religious freedom, inter-faith dialogue and the promotion of religious diversity.

The Archbishop of Dublin and Glendalough, Dr Michael Jackson, who gave the keynote address at the Mansion House on Tuesday, expressed concern for the victims of Monday night’s “unspeakable tragedy in Berlin”.

“Without this structural link between the civic and the religious worlds, our work would not be possible. We in turn hope that we offer a few things which may be useful to the Lord Mayor as he moves forward this agenda for peace and respect. We can provide ready access to communities right across Dublin to whom it is often hard to reach out. We can pledge our support in helping to connect this wonderful initiative with the Inter-Cultural Network of European cities.” 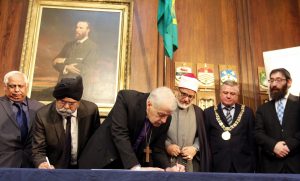 The Archbishop said that the faith leaders present should do everything in their power, as they move into the New Year, 2017, to get as many people as possible – inside and outside the World Faiths – to sign the charter.

“Creation and humanity unite us even when religion and culture continue to divide. The Lord Mayor makes this bold gesture and gracious statement at a time when we all look aghast at the plight of Aleppo, a city of people – individuals and communities – who have been brutalised almost to oblivion. Their doctrine of peaceful co-existence across Faiths and Cultures, Cultures and Faiths has been tested to breaking point and to a depth of degradation which history has often retrospectively called genocide.”

In his address, Archbishop Jackson said that in so many other ways, 2016 had widened our understanding of Dublin and Ireland “without diminishing our identity”.

“We have marked through commemoration people and events, history and myth which have framed decisions and perspectives on what it is to live through one hundred years of history and to live ahead for the future and to commit together to a different society of diversity of expression and respect for others in a changed and a changing Ireland.”

He told the representatives of the various faiths that the pressure “is on us to share the best of who we are as neighbours who want to be friends. The pressure is particularly on those of us who feel we have the ground of history under our feet as local Christians of whatever hue; until recently we have never accustomed ourselves to giving an account of ourselves; we have simply assumed an entitlement to be and to be here. All of us who stand with Faith as an expression of community and of self, of belief and of culture need to work quickly to keep up with the programme of the Charter launched today.”

Speaking about the event, the Lord Mayor described the charter as “far-seeing”. 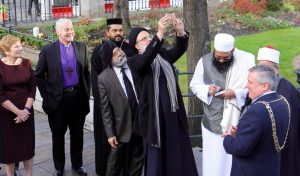 “Dublin has always enjoyed a very open attitude to different communities and cultures and this charter further reaffirms our commitment to this at a time when intolerance would appear to be more widespread among different nations,” he said.

He appealed to every faith community present at the ceremony to take in a family from Syria and look after and support that family for a period of two years and help them integrate into Irish society.

Warning that intolerance is “creeping in more and more around the world”, he said it was something the Dublin Interfaith Forum had said was not going to happen here. He pledged the signatories to the charter would act as a guiding light for tolerance.

The Lord Mayor appealed to the signatories of the charter to bring its commitments on tolerance and dialogue back to their faith communities and embed it in them.

According to Michael O’Sullivan, Chair of the Interfaith Forum, the new Interfaith Charter is intended to provide the platform for educating and encouraging people of different faiths to dialogue and act together in challenging all forms of injustice and discrimination.

Echoing recent media comments from the Minister for Integration, David Stanton, Mr O’Sullivan said that the Interfaith Forum is “committed to work alongside other agencies to influence and support the integration process on many levels.”

Archbishop Jackson described the Lord Mayor’s involvement in the Dublin City Interfaith Charter as a “proactive contribution by the First Citizen to the life of the city and its communities in the areas of faith and culture. I commend it to everyone as a charter of respect and diversity.”

Sheikh Hussein Halawa, Chair of the Irish Council of Imams said, “The most significant contribution we can make now is to help people to live confidently with religious diversity, and to dispel fear of differences, the fear of the ‘other’. The Interfaith Charter will enable faith communities to develop better understanding, relationships of deeper respect, and acceptance of each other as human beings.”