Home > News > Dublin exhibition of the photographs of Fr Browne

Dublin exhibition of the photographs of Fr Browne 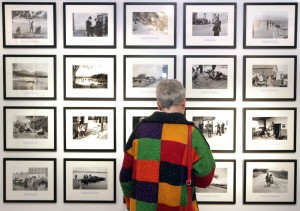 An exhibition of the work of distinguished World War I veteran and renowned photographer, Fr Frank Browne, has just opened in Co Dublin showing his images of the infamous Titanic as well as his travels worldwide.

The exhibition, entitled ‘Frank Browne: A Life Through The Lens’, will continue in Dun Laoghaire until October and it draws from Fr Browne’s European Tour in 1897 as well as his photographs of the Titanic taken in 1912.

Fr Browne is increasingly acknowledged to be one of the most significant photographers of the 20th century.

During the First World War he was a chaplain with the Irish Guards and was decorated a number of times in recognition of his bravery.

Born in Cork, at seventeen, before commencing his studies for the priesthood, Frank Browne (1880-1960) embarked on a tour of Europe armed with a camera.

He quickly discovered a strong affinity for photography, and he continued to take photographs throughout his life.

In 1921, still suffering from war wounds, he went to Australia to recuperate and made a superb series of photographs of life there.

Fr Browne was active in the photo-exhibition world and wrote articles for The Kodak Magazine. During this time he made 41,500 negatives.

He died in 1960 and his work was largely forgotten until 1985, when Fr Edward O’Donnell came upon a trunk containing the negatives and quickly recognised that the pictures were exceptional, but in many cases they were also deteriorating.

He commissioned Davison and Associates to salvage the priest’s incredible photographic legacy.

Fr Browne’s remarkable life is recorded in this exhibition and in a book entitled ‘Frank Browne, a Life Through the Lens’ produced by David and Edwin Davison and published by Yale University Press (2014).

With wit and a sharp eye, he observed 20th century Ireland; life as a Jesuit priest; his experience as a passenger on the first leg of the voyage of the Titanic in 1912; his service as a chaplain in the First World War; and his later travels throughout Europe, Egypt and Australia.

Thanks to Davison and Associates, his collection has now been conserved, duplicated and catalogued with the images re-mastered to print at a quality that does justice to the original photographs.

Tours of the exhibition will be held at 12 noon on the 22 August, the 5 and 19 of September and the 2 of October. These tours will last 40 minutes and there is no booking required and they are free.