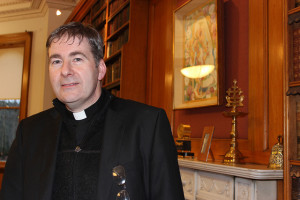 The appointment of a priest as the first Roman Catholic Chair of the Dublin Council of Churches has been hailed as “a ground-breaking ecumenical decision”.

Fr Damian McNeice is the first Roman Catholic to hold this position in the fifty year history of the Dublin Council of Churches (DCC). He takes over from Rev Mary Hunter of the Presbyterian Church.

The DCC was set up over half a century ago and is focused on encouraging co-operation between the varied Christian traditions in the Dublin city area.

It includes patrons and representatives from the Church of Ireland, Roman Catholic, Lutheran, Methodist and Presbyterian Churches, the Religious Society of Friends, the Greek, Romanian, Antiochene and Indian Orthodox Churches as well as the Salvation Army and Christian Aid.

Working with Fr McNeice will be Dr Niamh Hardiman of the Religious Society of Friends as Vice-chair and Uta Rabb of the Church of Ireland as Secretary.

In a statement, Fr McNeice said he was “very conscious that the trust being placed in me is the fruit of the great ecumenical relationships built up over decades through the Dublin Council of Churches.”

He added, “I hope that with the help of all the patrons and members, we’ll journey together ever closer to Christ who is the source of our life and unity.”

Fr McNeice has attended the Dublin Council of Churches (DCC) meetings since 2007.

Speaking to CatholicIreland.net, the 47-year-old priest, who acts as Master of Ceremonies for Archbishop Diarmuid Martin, said it was only been possible for a Roman Catholic to hold the position for the last five to six years.

He witnessed the moment the Roman Catholic Church was invited by the other patrons of the DCC to become a full member of the Council during the Week of Prayer for Christian Unity in January 2008.

“It was at the Week of Prayer for Christian Unity in 2008 that the Roman Catholic Church was formally accepted by the other member Churches and patrons as a full member of the Dublin Council of Churches.”

Prior to that the Catholic Church had observer status.

Fr McNeice is from Navan Road Parish in Dublin. He was ordained to the priesthood in 1992, he worked as priest teacher in Coláiste Dhúlaigh, Coolock, and in the Dublin Diocesan Communications Office before he undertook further studies in Sant’ Anselmo Pontifical Institute of Liturgy in Rome from 2004 to 2007.

As part of his Licentiate in Sacred Liturgy, he wrote a thesis on ‘Liturgical Themes in the writings of Br Max Thurian’, one of the founding members of the ecumenical monastic community of Taizé, France.

He told CatholicIreland.net that if “Br Roger was the mystic, coming up with these beautiful intuitions, Br Max was the theologian of the community. He helped to ground a lot of Roger’s intuitions in really beautiful theology. He was a scholar of very very high standard.”

A Calvinist originally, Br Max Thurian in 1988 asked to be ordained a Catholic priest.

In addition to his role with the DCC and as MC for Archbishop Martin, Fr McNeice assists in the Diocesan Liturgical Resource Centre and is Parish Chaplain in Whitehall. 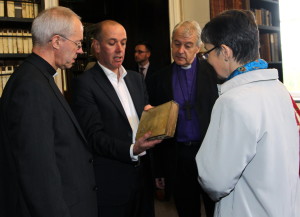 Separately, the Archbishop of Canterbury concluded his visit to the Church of Ireland on Friday morning in Dublin.

Archbishop Welby had already been in Belfast and Armagh and had preached at a Festal Evensong in St Patrick’s Cathedral in Armagh on Thursday evening.

His visit to Dublin was private and he was met by the Most Revd Dr Michael Jackson, Archbishop of Dublin.

Hosted by the Very Revd Victor Stacey, the Dean of St Patrick’s National Cathedral, Dublin, Archbishop Welby and his wife Caroline toured the cathedral and the nearby Archbishop Marsh’s Library.

The visit to St Patrick’s Cathedral included the ‘Lives Remembered’ exhibition which commemorates World War One. The exhibition’s centrepiece is the ‘Tree of Remembrance’ which honours all those affected by conflict.

In Marsh’s Library he was shown around by the Keeper, Dr Jason McElligott and Deputy Keeper, Sue Hemmens. He viewed a number of items of interest including a book which had been penetrated by a bullet during the 1916 Rising.

The Objectives of the Dublin Council of Churches (DCC) are:

·         To encourage co-operation between churches and inter-church groups, at both local and district (city) level.

·         To explore within a Christian fellowship, based on mutual love and the presence of Christ among us, the calling of the People of God to pray and work together for the fulfilment of Jesus’ prayer “that all may be one” [John 17:21].

·         To facilitate and exchange information and views of member churches on matters of concern.

·         To disseminate information on ecumenical activities and resources.