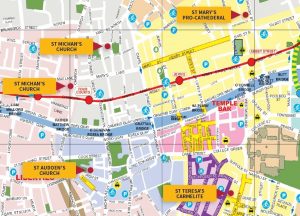 The Dublin Camino has been relaunched by the two archbishops of Dublin, Diarmuid Martin and Michael Jackson, as an ecumenical pilgrimage trail for those attending the World Meeting of Families.

Previously, the pilgrimage to seven of Dublin’s churches was part of the events surrounding the International Eucharistic Congress held in Ireland in 2012.

At each church – or station – along the camino route, pilgrims are invited to reflect upon a different theme.

Archbishops Martin and Jackson launched this latest iteration of the Dublin Camino by walking from St Michan’s Church of Ireland church, on Church Street, to St Michan’s Catholic church, on Halston Street, accompanied by parishioners from both parishes.

In an echo of the tradition surrounding the pilgrimage to Santiago de Compestella in Spain, pilgrims on the Dublin Camino will be issued with a pilgrim passport that they can have stamped at each of the seven churches along the route, which can be completed in any order. Each church is organising a roster of ambassadors to meet and greet pilgrims, stamp their pilgrim passports and offer them a WMOF Céad Míle Fáilte.

The Dublin Camino can be completed in a day or over several days between Saturday 18 August and Saturday 24 August, with participating churches open between 9.30 a.m. and 7 p.m. for the duration of the event. A map indicating the church locations is available in PDF form at www.dublindiocese.ie/7-church-pilgrim-walk-for-wmof2018.