Home > Featured > Drug trade is a “callous trade in death”

Drug trade is a “callous trade in death” 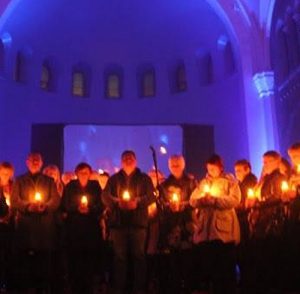 The drug trade is a ruthless trade in ruining lives, a callous trade in death, the Archbishop of Dublin said at a service held annually to remember those who have died from substance misuse and related causes.

“It is a ruthless and cynical and diabolic trade which has no respect for any life. It thrives on destroying the lives of the weakest, whether of those who fall into abuse or those who they trap into becoming agents of their despicable trade.”

Archbishop Diarmuid Martin was speaking at the 18th Service of Commemoration and Hope in the Church of Our Lady of Lourdes, Sean McDermott Street on Wednesday 1 February.

While remembering those who have died from substance abuse, the multidenominational annual service also offers hope to families still struggling with addiction or in recovery.

Addressing these families, the Archbishop of Dublin spoke of his great enjoyment each year when he celebrates the Sacrament of Confirmation in Sean McDermott Street Church. “At Confirmation you see young boys and girls at their best,” he said. “Their smiles portray how proud they are of themselves and of their families and of their school. It is wonderful to see real hope in their faces.”

Nothing made Archbishop Martin so sad and angry as “to see the hope of a young boy and girl robbed and be slowly destroyed through them falling victim to substance abuse. Their youthful smile becomes replaced by a despairing stare. Their hope is replaced by a tragic trap which despite all their efforts they find it harder and harder to break out of without a helping community.”

But he added, nothing touched his heart as much as “trying to imagine what it means to a young person to experience the freedom that comes with recovery, to be their true selves once again”.

He said “We are here to show any young person who becomes trapped in addiction that there still is hope as we let them know that there is a helping hand willing to pick them up – no matter how many times they fall – and help them along the difficult path to recovery.”

But the Archbishop of Dublin had a warning, from the words of Jesus, for those who ruin the lives of the young: “If anyone causes one of these little ones to stumble, it would be better for them to have a large millstone hung around their neck and to be drowned in the depths of the sea.”

He told those present at the service that “Those who trade in death bring that condemnation on themselves rendering themselves despicable.”

He continued: “We gather to speak words of hope. We remember those who have died. They went through hard times but their loved ones remember them for the goodness that always remained there hidden within their troubled lives.

“We speak words of hope and support to the young people of this community who are our hope and we commit ourselves to carry them in our hearts and our helping hands that they can realise their hopes and go through life with those smiles of hope.”

The Annual Service of Commemoration of Hope was organised by the National Family Support Network in Dublin’s North Inner City. This self-help organisation supports family support groups and and raises awareness of the difficulties faced by families in coping with drug use while recognising their important role in supporting the recovery of the drug-using family member. It was established in 2000 following the first Service of Commemoration and Hope.

Its membership consists of representatives of family support groups, individual family members and those working directly with families of drug users across the island of Ireland.