Vatican urges “creative and innovative approach” to intellectual property in order to ensure medicines get to the people who need them. 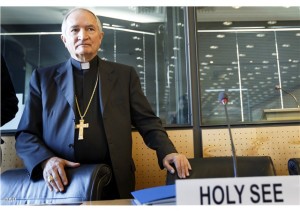 Archbishop Silvano M Tomasi, the Permanent Observer of the Holy See to the United Nations and Specialized Agencies in Geneva.

The Holy See on Wednesday urged that “a creative and innovative approach” to intellectual property be taken in order to ensure that medicines get to the people who need them.

“Application of the intellectual property instruments, as it currently prevails in many parts of the world, interferes with the right to health in two ways,” explained Archbishop Silvano M Tomasi, the Permanent Observer of the Holy See to the United Nations and Specialised Agencies in Geneva.

He was speaking at the annual Social Forum organised by the United Nations Human Rights Council, which was discussing making medicines are available, financially affordable, and physically accessible.

“First of all, some pharmaceutical companies assert a claim to unrealistic profit and cost recovery margins even though most governments and individual buyers from developing countries do not have the financial capacity to purchase these products at such high cost,” he continued.

“This system can lead to total disregard for those who cannot afford the price of certain medical products and allow an imbalanced free trade system, and thus constitute a virtual monopoly.”

Archbishop Tomasi said the second obstacle relates to research and development (R&D) in order to develop new and more effective medicines and other vital medical products, including diagnostic tools to facilitate early identification and treatment of certain life-threatening illnesses.

“The system, in fact, does not operate as an incentive to research on so-called ‘no market’ or ‘low return on investment’ treatments, such as those for neglected tropical diseases, rare diseases, or even for those illnesses that have higher prevalence among low-income people, or in economically-deprived regions, including HIV, tuberculosis, malaria, hepatitis and Ebola, which most recently has been ravaging coastal West Africa.”

“It is most regrettable, therefore, that, due to an excessive focus on profit, we witness a preference within much of the pharmaceutical industry to orient research toward health issues that have greater market potential in wealthier industrialised countries,” he said.

Archbishop Tomasi concluded by saying concern for the protection of intellectual property rights, while legitimate in itself, “must be seen within the wider perspective of promoting the common good, building global solidarity and prioritising the life and dignity of the world’s most vulnerable people, many of whom bear an inequitable burden of both communicable and non-communicable diseases.”