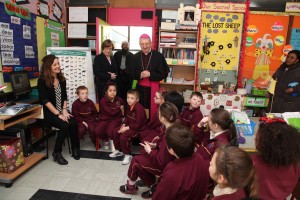 The Archdiocese of Dublin is committed to pluralism in educational provision, the Director of the diocese’s Education Secretariat assured the Joint Committee on Education and Social Protection this week.

Anne McDonagh told the Oireachtas Committee that it was an historic time in education in Dublin and its surrounding counties and that educational specialists in the diocesan education secretariat were “leading significant change.”

She explained that over the past two years, five amalgamations have been completed involving 10 schools while 15 schools are involved in negotiations at present which could lead to nine new schools being established.

Her presentation concerned primary schools and the future provision of education in schools for which the Archdiocese of Dublin has responsibility, as well as the possible reconfiguration of schools that may result in proposals for the opening, closure or amalgamation of schools.

According to Anne McDonagh, the diocese of Dublin has for well over a century been involved in primary education and a number of schools that were set up 150 years ago are still in existence.

“In its role as patron of schools, the Archdiocese has an obligation to plan for, evaluate and review, on an ongoing basis, its provision of schools.”

Ms McDonagh underlined that it is not the responsibility of the Church to be a provider of education for all children but the Church, as part of its mission, is committed to providing Catholic education for those parents who want it for their children.

“We have embarked on an ongoing, systematic re-organisation of the 466 primary schools in the Archdiocese of Dublin,” she explained.

Any review of the provision of Catholic education in any particular parish, re-organisation or amalgamation of existing schools under Catholic patronage might be appropriate when demographics, finance, divesting, were considered.

On the issue of divesting, she told the Oireachtas Committee that there is a need to provide for alternative patronage.

“This is not a retreat from the tradition of providing Catholic education. It is a recognition of the beginnings of a new presence.”

“Catholic education still has its vital place in our educational system, as something which brings its unique value system, a value system which is recognised by families of a variety of religious traditions who opt to send their children to a Catholic school,” she said.

Anne McDonagh added, “At the same time, as Catholic educators, we welcome the fact that there should be other schools which embrace a different ethos and will contribute, in their way, to the rightful pluralism of educational provision in today’s Ireland.”

On the issue of finance, she warned that schools that are losing numbers are experiencing financial difficulty.

During the last two financial years some schools have been spending from their reserves, she warned and added that a number of schools have come to the Patron in distress because they have run out of money.

“From our research, it appears that in two years’ time a significant percentage of schools may not be able to exist financially, based on current Departmental funding.”

The Archdiocese of Dublin’s Director of the Education Secretariat said successful re-organisations are those where all of the stakeholders contribute to and respect the process.

Referring to more contentious cases, where protests have erupted over plans to close schools or amalgamate them, she said the process in some instances had been frustrated where information was disclosed at an inappropriate stage.

“In a small number of cases staff do not see the need to address the situation and have on occasion, because of their fear of change, engaged in misinformation causing parents to believe that any change would worsen conditions for pupils and staff.”

“The decision to re-organise or amalgamate a school rests with the Patron,” she said.

Amalgamation of schools in areas of declining pupil numbers will ensure the survival of vibrant Catholics schools into the future, the Dublin spokeswoman said. .

“This re-imagining of education provision in Ireland requires the support of parents, teachers, communities and local and national representatives if it is to be successful,” she said.