In post-Brexit Britain, across England, the Catholic Church is to organise nationwide re-dedication ceremonies to unite, with Mary, in having the country open to the call of God.

The re-dedication ceremony takes place next month, on Sunday 29 March at midday, with simultaneous events taking place in Catholic churches and cathedrals from Cornwall to Cumbria and all counties and shires in between.

The event openly recalls a time when England was commonly known as “the Dowry of Mary”. The appellation was particularly strong in the 14th century, before the Tudor era. 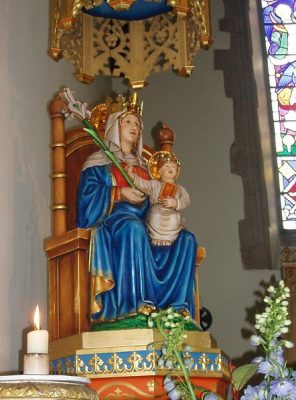 Our Lady of Walsingham at England’s national Marian shrine.Tudor era and the arrival of the anti-Catholic penal laws.

For most of the medieval period, it was  believed that England was blessed with the special protection of Our Lady.

In 1381, on the Feast of Corpus Christi, King Richard II dedicated England to Mary in a ceremony at Westminster Abbey – this was in thanksgiving for his royal kingdom being saved from destruction by the Peasants’ Revolt. From then on there was a belief that England had been “set aside” as a gift, or a dowry for Our Lady, to be under her guidance and care.

English primate, Cardinal Vin Nichols, Archbishop of Westminster says he and his brother bishops would like people across the country to join them in making both a personal promise and a communal entrustment to Our Lady.

This personal promise also known as the “Angelus Promise” because of its timing, is described as “a spiritual exercise created to assist you to embrace the message of Our Lady, as expressed in the Angelus”.

England’s bishops tell their flock that the exercise invites them to “share in the joy of the Annunciation” by following Mary’s openness to God’s call, when she became Christ’s first disciple and said ‘Yes!’. On Behold2020.com, the official website for the re-dedication, this nationwide Catholic ceremony is being billed as ‘The “Yes” of a generation’.

That  www.behold2020.com website also contains the text for a new Communal Act of Entrustment. The English bishops say: “The Act of Entrustment of England to The Virgin Mary is a prayer of profoundly historic and spiritual nature, bringing together the prayers of surrender and dedication that have echoed through our history.