Door of Mercy is path to encounter mercy of Jesus 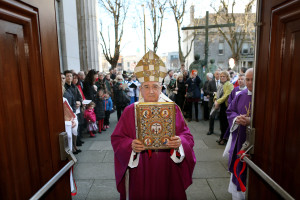 To mark the Jubilee of Mercy initiated by Pope Francis , Archbishop Diarmuid Martin opened a Door of Mercy at St Mary’s Pro-Cathedral, Marlborough Street, Dublin. Picture shows Archbishop Diarmuid Martin holding the Gospel at the door chosen for the Year of Mercy which leads into an area of the Pro-Cathedral that has two confessionals, a statue memorial to Venerable Matt Talbot, and also looks to the altar of St Laurence O’Toole, patron of Dublin, celebrated as a man of mercy.

In his homily at Mass in the Pro Cathedral in Dublin on Sunday, after he performed the rite of opening the Door of Mercy, Archbishop Diarmuid Martin said hopefully many would find time during the Jubilee Year to reflect on their lives in the sacrament of reconciliation.

He said many on that path would find encouragement in the figure of Venerable Matt Talbot, someone who overcame addiction through encountering a merciful God.

He also expressed the hope that many entering the Door of Mercy at St Mary’s Pro Cathedral would stop at the Altar of St Laurence O’Toole, patron of the Archdiocese of Dublin, who was a friend of the poor, peacemaker, reformer and man of prayer.

He appealed to them to pray for the Church in Dublin, for the people and priests of the diocese, and “especially for our young people and for me your Bishop”.

Though the Door of Mercy was “quite an ordinary wooden door” it has been in the cathedral for almost two centuries.

“The Holy Door is not folklore or a cultural tradition or some superstitious representation.  If we do not realise that Jesus is the true door, then we can pass through a Holy Door as often as we like and remain unchanged or simply feeling good,” the Archbishop said.

He said there are some who do not like the word mercy as it seems to them somehow condescending. “They say that people want justice and fulfilment and to realise themselves, rather than be the recipients of someone else’s mercy.”

But, he added, that is to misunderstand what mercy is.

“Mercy is an attribute of God. We see that right throughout the history of salvation. God is the one who knows us in the depths of our being. He knows the goodness that is in us and yet he knows the other darker dimensions of our lives, those dimensions which we hardly recognise ourselves or do not wish to recognise. God knows even our most secret sins.” 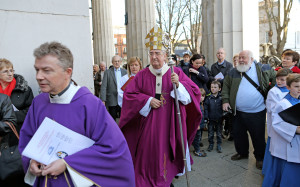 He warned people that if they set out with the idea that our God is a harsh unforgiving God, they would remain closed in their sinfulness or with a blemished and imperfect sense of our own integrity, which would never allow them to be fully the person they can and want to be.

“We receive mercy so that we can be merciful. The Year of Mercy is an occasion for us to recall God’s mercy, but also the Year of Mercy is a call to the Church to renewal though being more and more a place where people can experience mercy and forgiveness and be a sign of mercy within an often hash and litigious world,” the Archbishop stated.

He criticised how too many men, women and children had not experienced the Church in that way.

“Too many of us, believers and leaders in the Church, have been all too quick to change God’s mercy into our prejudice and intolerance and our vindictive justice. We have been quick to judge. We have created a harsh God and left the troubled scrupulous and guilt-ridden.”

He underlined that “We have been so concerned with the ninety-nine of our institutions and our like-minded that we have not only forgotten the one who was lost but we have antagonised them in their feeling lost or abandoned. We have tried to institutionalise God’s mercy and many of those in our institutions have experienced them as anything but merciful.”

Asking how do the faithful as individuals and as a Church community incarnate the mercy of Jesus Christ in society, the Archbishop suggested that as a Church they have to re-invent many of the aspects of their presence in Irish society.

“We have to free our hearts from the desire to control and never try to hide a yearning to control behind our interpretation of the teaching of Jesus.”

“We have even distorted that great instrument of God’s forgiveness, the Sacrament of Penance, into an invasive tribunal of judgement, rather than an opportunity of a merciful encounter which liberates us.”

On a seasonal note, Archbishop Martin emphasised that amid all the hustle and bustle of our material preparations for Christmas “we have to remember that Christmas is not a moment of sentimental joyfulness:  it is a feast which challenges each of to ask that same question: what am I to do?  How should I direct the way I live in a manner which reflects the Mystery I am called to celebrate?”