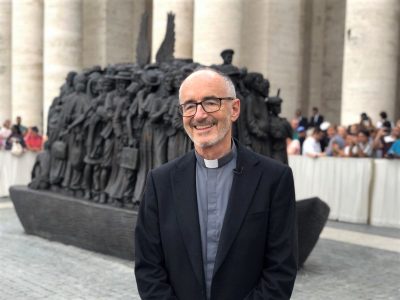 A top Vatican cardinal has said migrants and refugees should not be deprived of housing and accommodation on the grounds that there is a housing crisis in the country where they have settled.

Cardinal Michael Czerny, the Vatican’s Undersecretary of the Migrants and Refugees Section of the Dicastery for Promoting Integral Human Development, said the Church’s response was to seek to maintain a balance between the needs of the newly arrived and the needs of the poor in the country where they had moved to.

Speaking about policy failings in areas such as housing, he told participants at a webinar titled ‘Overcoming Indifference to Migrants and Refugees’, which was organised by the international catholic weekly The Tablet, “This is where migrants not only appeal to our charity but they also shed a light on our indigenous injustices.”

The Vatican’s point man on migrants spoke about the situation where a family that has fled their home country is offered housing by a parish, or the municipality or the state. But then people who have had desperate problems trying to secure housing and have been on waiting lists for years become upset because they still can’t secure housing and someone who has recently arrived in the country has.

He added, “The newly arrived with their obvious need for housing shed a light on the absurdity of the injustices to which we are blind” such as “a housing tragedy in our midst that has been going on for generations”.

“Are we not capable of solving the housing problem – is it so difficult? Is it beyond our economic, social, political, cultural capacity? Do we have to have 10-15% living in sub-standard or non-existent housing? Is that what makes us a free, civilised society – obviously not,” the Canadian prelate challenged.

In his discussion with The Tablet’s Rome Correspondent, Christopher Lamb, Cardinal Czerny said, “This year of Covid-19 with all its suffering – its terrible toll of suffering and death – maybe will be looked back on as a year of revelation.” The Covid-19 pandemic had “opened our eyes to the peripheries in our midst”.

In Italy, where he is now based since 2016 when Pope Francis appointed him Undersecretary for Migrants and Refugees, “It was a real eye-opener for people to realise how many migrants there were and the kind of work they were doing and the kinds of situation they were living in.”

“It is very paradoxical, but I think many of us would say that it was only when we were locked down and prevented from rushing around hither and yon that we began to discover important facts. It was only then that our eyes were opened to the fact that some of the most basic needs we have are met by these very same people [migrants]. Homecare is a migrant effort; likewise aspects of agriculture production is dominated either seasonally or definitively by these newcomers.”

Elsewhere in the discussion, the Cardinal was asked about how Pope Francis had found the lockdown during the pandemic.

“He is very fine – he has adapted very well,” the prelate explained. “What we can look on with gratitude is how he adapted his ministry to the circumstances. He has the ability to adapt and use the means available to exercise his ministry as Bishop of Rome and as Holy Father to preach the Gospel and bring the Gospel to all sorts of peripheries.”

“I have the feeling that the grace that came with this capacity is very consoling for him and so he is in good health, good humour and in good hope.”