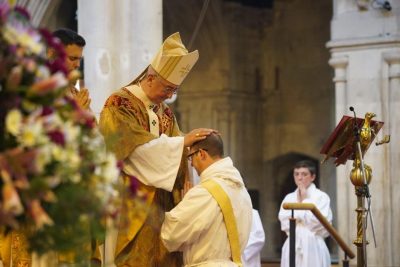 St Saviour’s Dominican church in Dublin was a hive of activity last Saturday as it hosted the Pro-Life Mass ahead of the Rally for Life, which was then followed by the ordination of Fr Matthew Farrell OP.

On Saturday afternoon Archbishop Diarmuid Martin of Dublin presided at the ordination ceremony of Fr Farrell.

The 44-year-old priest’s sisters, Lorraine, Michelle and Natalie, and his brother, David, attended the joyful ceremony along with their families.

A native of Daingean, Co. Offaly, Fr Farrell joined the Dominicans in 2012.

Immediately after secondary school he worked in the bar trade in Tullamore and in Daingean.

Attending Athlone Institute of Technology as a mature student, he gained a degree in applied chemistry, working for seven years as a laboratory analyst.

After his father’s death, he returned to Daingean to work in the family business with his brother.

As a Dominican he spent a year in the noviciate in Cork before moving to the house of studies at St Saviour’s in Dublin to study philosophy, Scripture and theology, in preparation for ministry as a priest.

He made solemn vows as a Dominican in September 2017.

Later this summer he will move to Co. Kerry to join the Dominican community at Holy Cross church, Tralee, where he will minister.

Speaking about his vocation story, Fr Matthew explained that by the end of secondary school he had stopped going to Mass.

“When I was 24, my auntie brought me to a retreat which was run by Youth 2000. This sparked within me an interest in religion in general, but it was not until I was 28 that I made a decision to recommit myself to the practice of the Catholic faith.” 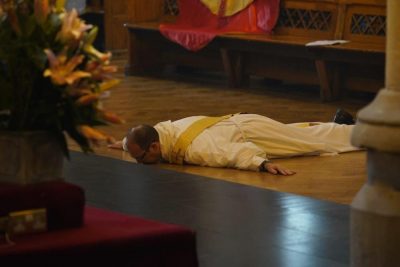 He started to go to Mass every Sunday, went regularly to confession and got involved with a Youth 2000 prayer meeting which had started in Tullamore.

“I started to grow in my faith in the love and mercy of Jesus Christ and faith in the power of prayer and the sacraments to help me grow closer to God,” he explained.

At the age of 37, after considering the possibility that he was being called to religious life, he joined the Dominicans.

Before the ordination ceremony, which began at 3 p.m., Bishop Kevin Doran of Elphin celebrated Mass ahead of the Rally for Life, which was attended by up to 10,000 people.

Bishop Doran noted that the rally was taking place on the feast of St Maria Goretti, who lost her life as a result of being stabbed 14 times by a young man whose sexual advances she rejected.

“She is best remembered today, however, as a young woman whose forgiveness actually converted her assailant. For pro-life people of faith, she is a reminder firstly that we must stand firm in our defence of the innocent, but also that our aim must never be to demonise those who, for whatever reason, do not believe the Gospel of Life. They too are the sons and daughters of God. Our mission is to win them over by prayer, by rational argument and by the witness of our own lives and to call them, in the name of Christ, to be reconciled,” he said.