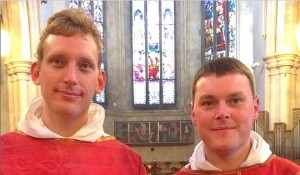 The Irish Dominicans celebrated the ordination of two new priests in a ceremony presided over by Archbishop Diarmuid Martin on Saturday at St Saviour’s Church in Dublin’s Dominick Street.

Fr Colm Mannion OP from Birr in Co Offaly worked with an international airline and for the Legion of Mary before entering the novitiate.

Fr Luuk Jansen OP is originally from the Netherlands and discovered the faith through a colleague while working in the west of Ireland.

A number of years after being baptised, he entered the Irish Dominican novitiate in Limerick and continued his formation and studies in Dublin which culminated in his ordination as a priest yesterday.

A third Dominican friar, Br Matthew Martinez, will be ordained in August in his native Trinidad, where the Irish Dominicans have a mission.

In his homily, Archbishop Diarmuid Martin told the packed church that being a priest today is not easy, but he added that being a good priest is both challenging and fulfilling.

“Priesthood is not a prize to be attained, but a calling to empty ourselves. Priesthood is not a claim to special privilege or to external dignity. The Gospel stresses the fundamental link between leadership in the Church and the sacrifice of the Eucharist,” the Archbishop said in his homily.

He underlined that priesthood is a calling to live a life of service and simplicity and a “ministry of service like that of Jesus.”

“We gather as a community of family and friends of these two Deacons, Colm Mannion and Luuk Jensen who are to be ordained priests in the Dominican Order through the prayer of the Church and the laying on of hands.

We rejoice with the Dominican community here in Dominick Street and in the entire province and with all those who have been responsible for the spiritual and academic formation of these two future priests. 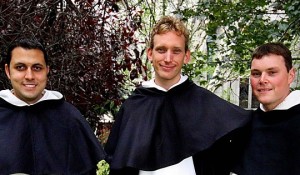 The Archbishop underlined in his homily that priesthood “is not a prize to be attained” but a calling to be conformed to Jesus Christ, the High Priest” and that our vocation and destiny are formed in the womb before we are born.

“There is a danger in today’s world that the priest can lose direction and that despite being busy doing ‘priestly things’ he actually becomes something else.”

The congregation was told that the priest is not a social worker, or the leader of a social movement or a social commentator or a social reformer.

“The priest is the one who knows Jesus Christ and who attracts people not because of things that he does but because his faith in Jesus gives his life an integrity which allows him to be a true Father to those encounters.”

“Priesthood is not a caste. The priest may never look down on or feel superior to God’s people. To do so would be to pretend oneself to be God himself.”

The Archbishop asked how many of us have turned in difficult moments to a good priest.

How many of us have gotten an answer to complex personal problems, not because the priest had special technical skills in counselling, but because we saw in him Gospel wisdom inspired by integrity in life.

He said it was an encounter with Gospel wisdom which would attract young people to the priesthood.