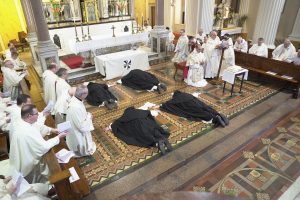 The Dominicans have enjoyed a bountiful week on the vocations front with four novices professed, another five new postulants received into the novitiate and one man solemnly professed.

The next step in their lives as Dominicans will see them go to the order’s Studium in St Saviour’s priory in Dublin.

There they will study philosophy and theology as part of their ongoing formation.

On Thursday, the Feast of the Exaltation of the Cross, the Dominicans also received five new novices. The feast-day is traditionally the day on which postulants who are joining the Order receive the habit for a trial period.

After a year’s novitiate, these five men, if they continue on this path, will make their first profession on 15 September 2018, the Feast of the Our Lady of Sorrows.

During the Mass the new novices prayed, “May we be men of the Gospel, following in the footsteps of our Saviour.”

Earlier in the week, Bro Matthew Farrell OP made his Solemn Profession in a ceremony presided over by the Dominican provincial Fr Gregory Carroll OP in St Saviour’s Church, Dominick Street, Dublin.