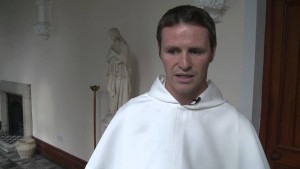 A former Manchester United and Northern Ireland footballer who is training to become a Dominican priest will help celebrate the 40th anniversary of his native parish in Belfast this week.

Br Philip Mulryne, (38) who is originally from St Oliver’s Parish in Lenadoon in Belfast, will return for a special mission next week to celebrate the parish’s 40th anniversary.

The mission will be led by two Dominican preachers, Fr John Walsh and Fr Ciaran Dougherty, and commences this weekend on Saturday 16 April and concludes on Sunday 24 April.

The mission will include a morning Mass each day at 10am and a Rosary ceremony and Benediction every evening at 7pm.

The mission is been organised by the St Oliver Plunkett’s Parish Council which was established by the Bishop of Down & Connor Noel Treanor last year.

Br Mulryne joined Manchester United under Alex Ferguson and was part of the famed class of ‘92 featuring the likes of Beckham, Scholes, Giggs, Butt and the Neville brothers.

The Northern Irish man struggled to get Alex Ferguson’s attention with such competition in the first-team and made his international bow against Belgium in February 1997 before making his debut for United in the Coca-Cola Cup the following October.

He made his one and only Premier League appearance against Barnsley at the end of the 1997/98 season, one of three players to make his league debut with Ryan Giggs, Andy Cole, Teddy Sheringham and Nicky Butt also in the side.

In search of playing time, Mulryne joined Norwich City in March 1999, two months before the historic Treble was sealed for £500,000 and spent six years at Carrow Road.

Despite a broken leg, a Division One play-off final defeat and just a handful of Premier League appearances after the Canaries were promoted as champions in 2004, Mulryne was a fans’ favourite and made 161 appearances at the club.

Spells at Cardiff City, Ipswich, Brighton, Legia Warsaw, Barnsley and Leyton Orient followed and in 2008, with 27 international appearances to his name, he called time on his playing career.

Mulryne had been involved in various charity activities post-retirement and it is believed that Bishop Noel Treanor of Down and Connor invited him to join the priesthood on foot of his volunteer work.

Sally Mulryne confirmed the news in 2009 that her son would begin a two-year philosophy degree in Rome, followed by a four-year theology degree before finally be qualifying as a priest.

It is believed that he will attend the parish Novena each day in Belfast.

The Parish of St Oliver Plunkett is situated in West Belfast, in the Diocese of Down and Connor. It was established in 1976, five years after the church was built.