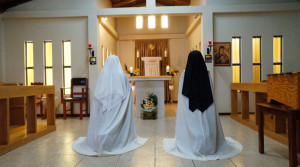 A film about life within the cloisters of a London-based order of contemplative Benedictine nuns has been entered into an international online film festival.

Culture Unplugged invited the Tyburn nuns to enter ‘Tyburn Convent Gloria Deo’ into its Festival 2015: Humanity Explored and has agreed to screen the 90-minute film shot and produced by Michael Luke Davies.

Monali Shrivastava of the Culture Unplugged Festival Team wrote to the nuns at Tyburn Convent to say that organisers believed the documentary to be “very much aligned with the theme and mission of the festival”, which opens on 16 December 2014.

“We are delighted to be able to share it with viewers who arrive at the online festival venue,” she said in her letter.

“The festival efforts are guided by a socio-spiritual mission that aspires to raise our collective consciousness by gathering global citizens at a venue of this kind.”

“The audience of the festival consists not only of professors, students, activists, journalists, anthropologists and people from many diverse fields, but also filmmakers and producers who identify talent across borders for present and future collaborations.”

Mother Xavier McMonagle OSB, Assistant Mother General said, “At Tyburn Convent, we see this invitation to be part of the Culture Unplugged as a challenging breakthrough for a cloistered community to be invited to have its first major DVD, Tyburn Convent Gloria Deo, in such a stimulating and exciting film festival.”

Since the launch of its first online film festival in 2008, Culture Unplugged film festivals have been visited by more than 60 million people from more than 39,000 towns and cities in more than 231 countries and territories.

Released on DVD in 2011, Tyburn Convent Gloria Deo takes the viewer on a fascinating visual tour of nine of the order’s convents, many of which have been founded within just the last few decades.

The film begins at the mother house in London, where the order was established in 1903, before moving on to newer houses in Cork and Largs in Scotland.

It also offers a window into the life of the nuns in monasteries situated in such locations as Pacific fishing villages in Latin America, aloft Andean peaks, amid the Blue Mountains of New South Wales and the rural beauty of New Zealand, as well as the frenetic bustle of cosmopolitan Rome. 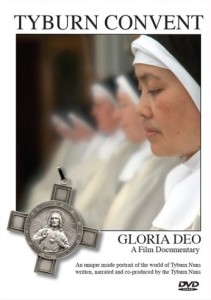 It shows nuns entering the convents as novices as well as making their final professions and movingly reveals how the monasteries both benefit and are supported by the communities in which they flourish.

The unique and beautifully-made film, the work of a former West End fashion and beauty photographer, also offers the viewer a vivid and authentic insight into the spirituality of the mothers, based on work, prayer and, most importantly, in perpetual adoration of Jesus Christ in the Most Holy Eucharist.

Since the film was made the Tyburn Nuns have also opened additional convents in Nigeria and in France, close to the home of their foundress Mother Marie Adele Garnier.

Copies of the film can be bought from the Tyburn Convent website: www.tyburnconvent.org.uk

The Tyburn Nuns – the Adorers of the Sacred Heart of Jesus of Montmartre Order of St Benedict – are an order of cloistered contemplative Benedictine nuns.

The aim of the congregation is to glorify the Most Blessed Trinity, finding practical expression in the daily participation in the Holy Mass, the choral celebration of the Divine Office, the perpetual adoration of the Blessed Sacrament exposed in the Monstrance, and in daily prayer for the Holy Father, the Church, the country and for the entire human family.

The nuns live within the monastic tradition of the Church under the Rule of St Benedict, following his instruction ora et labora – pray and work.

Tyburn Convent near Marble Arch, London, is today the world-famous mother house of the Tyburn Nuns.

For more than 100 years they have prayed there unceasingly before Jesus in the Most Holy Eucharist to honour the 105 beatified or canonised Catholic martyrs who suffered and died for their faith at Tyburn between 1535 and 1681.

The nuns also pray continuously for the needs of the universal human family.

The Tyburn Martyrs are the Catholics men and women who were executed at the Tyburn gallows during the Reformation.

The first was St John Houghton, the prior of the London Charterhouse, who was hanged, drawn and quartered on 4 May 1535 for refusing to take the oath attached to the Act of Succession.

The last Tyburn martyr was St Oliver Plunkett, the Archbishop of Armagh, who was hanged, drawn and quartered on 1 July 1681 after he was falsely accused of conspiring to kill King Charles II under the fabricated plot of Titus Oates.

There are 20 canonised saints among the martyrs. They include St Edmund Campion, St Robert Southwell, St John Southworth – as well as two women, St Margaret Ward and St Anne Line.

Born in London, Mr Davies was a student of design and technology at Farnborough College of Technology, Hampshire, before joining Bow Street Studios in Covent Garden, London, as an assistant fashion photographer, spending nine years filming and photographing models for fashion and beauty agencies. He left the firm to expand into commercial graphic design.

He developed an interest in virtual reality photography and was a pioneer of 360 degree panoramic images, a device now incorporated in the websites of most estate agencies, which he used for the first time on the websites of the Benedictine St Michael’s Abbey, Farnborough, and St Hugh’s Charterhouse, the Carthusian abbey at Parkminster, West Sussex.

His work received international acclaim and was the subject of Web Wise, a short BBC film of 1998.

It was because of the exceptional quality of his work in designing religious websites that Mr Davies was commissioned by the Tyburn Nuns to produce the first of their websites. Mr Davies is a non-Catholic but describes himself as a man of “strong faith”.