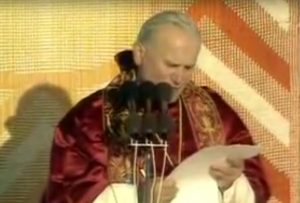 The role of St Pope John Paul II in the Northern Ireland peace process is told in a documentary film due to be released in Irish cinemas on Friday.

John Paul II in Ireland: A Plea for Peace is directed by David Naglieri, who won two Emmy Awards for another documentary about the Polish-born Pontiff, Liberating a Continent: John Paul II and the Fall of Communism. He has directed about a dozen documentaries with Catholic themes.

The best remembered lines from the Pope’s homily in Drogheda are: “Now I wish to speak to all men and women engaged in violence. I appeal to you, in language of passionate pleading. On my knees I beg you to turn away from the paths of violence and to return to the ways of peace. You may claim to seek justice. I too believe in justice, and seek justice. But violence only delays the day of justice. Violence destroys the work of justice. Further violence in Ireland will only drag down to ruin the land you claim to love and the values you claim to cherish.”

These words were immediately rejected by the IRA, with a statement saying: “In all conscience, we believe that force is by far the only means of removing the evil of British presence in Ireland.”

However, at the Clonard monastery in Belfast, the late Fr Reid noted that the Pope didn’t just address the men of violence. John Paul II said: “To all who bear political responsibility for the affairs of Ireland…You politicians must prove them [the men of violence] to be wrong. You must show that there is a peaceful, political way to justice. You must show that peace achieves the works of justice, and violence does not.”

With the approval of Archbishop Edward Daly of Armagh, who wrote most of the Pope’s speeches in Ireland, Fr Reid embarked on behind-the-scenes diplomatic activity that led to the start of the Hume-Adams talks in 1988. Those secret talks between Gerry Adams, president of Sinn Féin, and John Hume, leader of the SDLP, led to a joint declaration (the first of several) being made by the two men, which said: “Everyone has a solemn duty to change the political climate away from conflict and towards a process of national reconciliation, which sees the peaceful accommodation of the differences between the people of Britain and Ireland and the Irish people themselves.”

That joint statement led to the 1993 Downing Street Declaration by British Prime Minister John Major and An Taoiseach Albert Reynolds which affirmed the right of the people of Ireland to self-determination, and that Northern Ireland would be transferred to the Republic if the majority of the people in the Six Counties were in favour of such a move. Ultimately, that paved the way for the Good Friday Agreement of 1998, which brought in a power-sharing government in Northern Ireland, reform of the Northern Ireland Police Service and –  so far – a lasting peace.

“It was the Catholic peer, Lord David Alton, who suggested to us that there was a direct line between Pope John Paul II’s visit to Ireland and the Northern Ireland peace process,” Mr Naglieri told CatholicIreland.net. “We thought that was a story that deserves to be told.”