The Irish film production company behind the award-winning ‘One Million Dubliners’ documentary about Glasnevin cemetery has launched a crowd funding campaign to raise money for a new documentary on Knock.

Underground Films is aiming to raise €70,000 in 30 days in order to complete the project which began filming last March.

So far, footage includes the arrival of the New York pilgrimage last weekend, the St Patrick’s Day parade in New York City, which was Grand Marshalled by Cardinal Timothy Dolan, and the renovation work on the basilica.

The production company says shooting will continue up to and including Easter 2016.

She said there is a lot to explore currently with the multi-million euro restoration project underway at Knock, a plane full of American pilgrims touching down last Sunday, and thousands of faithful seeking a miracle.

“Knock the Film asks the question, can a tiny, rural Irish town become the new Lourdes? At the core of this documentary is an exploration of religion in Ireland. Does it have a place anymore? In an Ireland where marriage equality was passed overwhelmingly and where there are movements beginning to end Church patronage within education, who are the 1.6 million visitors who travel to Knock every year? What draws them to this place?” 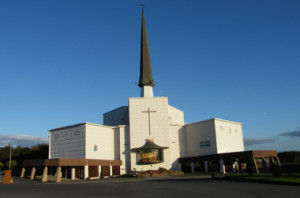 The film meets middle-aged romantics searching for the perfect partner at the Knock Marriage Bureau, Travellers who walk barefoot for days to reach the Shrine, Catholic pilgrims seeking benediction or absolution, curious Muslims from Ballyhaunis, recovering addicts and the sick looking for a miracle cure.

“As we follow the modernisation of the Shrine and the village itself, we explore different attitudes to faith, belief and the basic human need for hope. What meaning does a place like Knock hold in twenty-first century Ireland? Is this tiny town a throwback to times gone by, a relic of an older Ireland, or does it offer a beacon of hope?” Rachel Lysaght commented.

She added that the film’s central focus is on the human stories, the real lives of the people who travel to Knock – whether Pope or pauper – we are interested in the reasons why people are drawn to this iconic place, and what meaning it holds for them.

Asked if people have been surprised by the fact that Underground Films chose Knock to follow up ‘One Million Dubliners’, Rachel Lysaght told CatholicIreland.net, “We haven’t encountered any major surprise as to the subject matter – the feedback we’ve had so far has been overwhelmingly supportive and encouraging.”

“I think people are more surprised to discover that nobody has made a feature documentary about Knock before. It’s a place that gets 1.6 million visitors a year and is filled with so many compelling human stories, stories of hope and stories of faith – it has been crying out to have a film made about it – and we’re privileged to be in the position to now do so.”

“Filming observationally requires spending time in these places, getting to know people, searching out the most compelling stories, gaining trust. Though we work as a tight unit; flights, travel, accommodation, research, shoot and edit costs all add up. As well as this, donations are subject to VAT – so we’ve had to factor all taxes into our fundraising goal. But donors can get some amazing awards for their contributions.” You can click here to check them out

The documentary also aims to examine Knock’s international resonance asking can a visit to this small town of just 2,000 souls, create a ripple effect? What does Knock mean to people outside of Ireland? What does this place represent?

“We are currently filming with some of the 178 US pilgrims who landed into Knock Airport on Sunday 9 August on the first ever transatlantic pilgrimage. We are also filming with Cardinal Timothy Dolan.”

“A few months after the American pilgrimage, we intend to film a follow up with some of the visitors we’ve come to know in Mayo – this is where the crowdfunding support comes into play. Meeting them again at their homes in Manhattan, Cleveland, Boston… we will discover if and how their visit to Knock has changed their perspectives on life, belief and religion.”

They will also film a piece with Mayor Marty Walsh of Boston who visited Knock as a child.

A beautiful mosaic has been commissioned for the Basilica in Knock, and is being created just north of Venice in Italy. The production crew has already filmed some behind the scenes footage of the creation of this centrepiece.

“We will continue to film with the Italian artisan craft workers tasked with creating this huge mosaic,” Rachel Lysaght explained.

“In uncovering these international stories we examine not only the impact Knock has on those visitors who come from overseas, but we also gain a richer understanding of the transformative effect outside influence has on this small, rural town and its plans for growth,” she commented.

Stating, “We believe in miracles” she added that they “hope that anyone who does too will help us make this film a reality”.

“We are asking people to support Knock the Film, both in terms of financial donations, yes, but also by sharing information about the project with friends and family, and joining in the conversation online.”

Read more on the official film page, where you can also view some footage and get to know a few of the people who populate this iconic place.

Become a Friend of the Film on Facebook to stay up to date with all our latest news, and follow us on Twitter with the #KnockFilm hashtag.