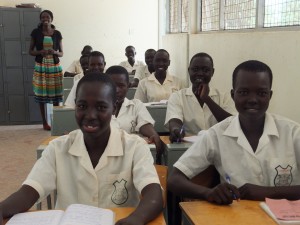 Students in class at Loreto Rumbek in South Sudan, one of the first secondary schools for girls in the world’s newest nation. Pic courtesy: Mary Ward International Ireland.

South Sudan is the world’s youngest country, and despite huge hopes, educating girls is still a rarity.

Only 35% of girls in South Sudan will attend school, and of those a large majority will drop out. It’s not just a matter of getting girls into school, it’s a case of keeping them there too.

Over the last 10 years, Sr Orla as Principal of the Loreto Secondary School in Rumbek has passed on her love and enthusiasm for education to all of her students.

The school has grown from 35 students to 183 attracting girls from all across South Sudan.

Sr Orla spoke to Fergal McCarthy in South Sudan for a Misean Cara commissioned documentary South Sudan 101: Education in the World’s Youngest Country which was broadcast on Newstalk FM on Saturday, 12 March.

The documentary focuses on the transformation that education can achieve through the work of Irish missionaries like Sr Orla.

She herself had an unorthodox nomadic childhood as she and her family relocated to different parts of Ireland every few years until they finally settled in Bray, Co Wicklow. It was here that Sr Orla’s calling to be a Loreto Sister was born.

“While I was a student in the finishing school, I had a strong desire to be a Loreto Sister. When we came obviously South Sudan didn’t exist, it’s a new country since 2011 and we’ve just celebrated our fourth year of independence,” says Sr Orla.

In 2004, the Loreto Sisters in Ireland and worldwide started a new movement called ‘Courage to Move.’

“I actually felt very drawn to the idea of coming here, and working in South Sudan. I had never been to Africa. I didn’t know anything about the life of a missionary as such but there was just some attraction to it.”

“That was 10 years ago, and I’m still here. I feel very much at home. There is a massive challenge every day. There is definitely a God-thing in it because I think the whole mission that we have here is one big miracle after another,” says Sr Orla, “it’s been a great journey, and it’s great to see the girls grow. It’s great to see the school grow.”

The Loreto Secondary School is located on the edge of Rumbek town the capital of the Lakes State. It’s the only school of its kind in the region.

“We started with the Secondary School with two classes with 35 girls, and we now have 183 girls…They live with us pretty much like the Irish school timetable,” says Sr Orla, “we have three terms in the year. They can go home every mid-term if their families are close enough depending on what is happening or they can stay here with us during the mid-term.”

“The Secondary School is four years, it’s a four year programme. The girls live here with us for the four years. They have a home environment, they get their food here – three meals a day.”

“They get videos on a Saturday night. They cultivate, one of the things they do is an income generating project. They all dig, and they all farm. The idea is that they are supposed to produce some of the food that they eat as well.”

“They also take leadership roles. The government has affirmative action where they give 25% of all government positions to women. The difficulty is that most of those positions are occupied by women who make tea or who sweep because we don’t have 25% of the population educated, which is women to take those positions,” says Sr Orla.

“So from an early stage when the girls are here, we try to give them responsibility either it’s looking after their class, equipment, the farm or animals, they might be looking after the young students in the Primary School, they may be responsible for measuring the food or organising the dining room or whatever. It’s a prefect system but it’s more than that.”

With the success of the Secondary School, the Loreto Sisters saw a great need for a Primary School in the area. Over the last four years, the Primary School has grown to 10 classes with just under 500 students – boys and girls from the surrounding communities.

This success has by no means been easy. South Sudan has been plagued by continued civil war, and inter-clan conflict – forces that fought side by side during the war of independence now fight each other.

“I suppose independence was a huge high, and we had to come down. Unfortunately we’ve been coming down ever since. People had that dream that life was going to be better may be that there was going to be an instant fix to our problems. That we would have better roads and infrastructure, jobs, money, and security,” says Sr Orla.

“To change us from a fighting nation to a civilised working democracy overnight, I don’t think anyone can expect that, and I think that we did think it would be a quick fix.”

“There is also a question of ethnicity, which is something we don’t have in Ireland. We have it when we play GAA and whose county you are following but we don’t really have it in the same context as Africa.”

“In Africa, in South Sudan we have a lot of tribes, and people identify themselves with their tribe. South Sudan has oil, and wherever there is oil there is tension and trouble…every young man has a gun. We have always had a problem with our young men their cows and guns, because we have a big culture of revenge. So what happens here every day is that young men take the law into their own hands, killing one another.”