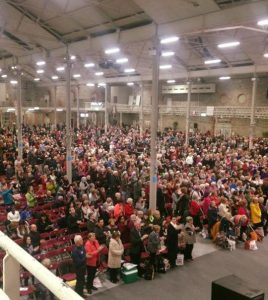 Events of the moment such as the referendum on abortion and the World Meeting of Families (WMOF) 2018, were highlighted at the Divine Mercy Conference at RDS, Dublin during the weekend (18-19 February 2018).

“The whole theme of the conference was to have courage,” Don Devaney, Chairman and Director, Divine Mercy Conference, told Catholicireland.net. Explaining that the theme is taken from Matthew’s gospel “Courage It is I, Do Not Be Afraid” (Mt14:27) he added, “That is very prophetic for us with the (referendum on the) Eighth Amendment coming up – just for Catholics to have the courage to stand for what we believe in.”

He said that Caroline Simmons, a solicitor who has been volunteering with the Pro Life Campaign since the X case in 1992, received a standing ovation when she addressed the conference. “She put across in very clear language the implications of what is ahead of us and what we can do about it,” said Don Devaney.

Emma Maloney, a student from Maynooth, Co Kildare, who also volunteers with the Pro-Life Campaign, gave her testimony of being pressurised by doctors to have an abortion. She resisted and is now mother to Rossa, aged 2, who was present with her at the conference.

Archbishop of Dublin and Primate of Ireland, Dr Diarmuid Martin, and Bishop Eamon Walsh, Auxiliary Bishop of Dublin, celebrated Masses at the conference. 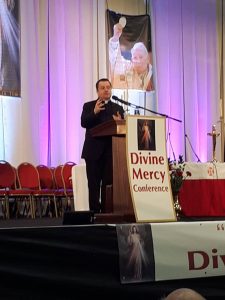 WMOF2018 Secretary General, Fr Tim Bartlett, told the conference about the importance of the family, and how Pope Francis views the family. Those on the WMOF2018 stand in the conference hall at the RDS, stated that there was “great energy and excitement” among those attending the conference and there was a huge interest in WMOF2018.

There were 3,000 participants on Saturday at the RDS and 2,000 on Sunday. This was less than last year but Don Devaney said that there were other events on the same weekend, and that pro-life campaigners are out canvassing in advance of the referendum. He would love to see a central register for events in the Catholic church so they do not coincide. A venue for Catholic and Christian conferences would also be a Godsend for conferences such as this.

The conference opened with Ralph Martin, who spoke about encouraging people to be apostles of mercy and to go out into the world to do this in the sense that Jesus has no hands but ours, no feet but ours, and no voice but ours. From the USA, Ralph Martin has been a leader in renewal movements in the Catholic Church for many years, including the Cursillo Movement, Charismatic Renewal and as founding editor of New Covenant Magazine. Currently, Ralph is president of Renewal Ministries.

Another speaker was Magnus MacFarlane-Barrow, OBE, Founder and Chief Executive of Mary’s Meals, a global hunger charity which in 2015, reached the milestone of providing a daily meal in a place of education for more than one million of the world’s poorest children. The daily meal attracts children to the classroom where they can gain the basic education that could be their route out of poverty. The organisation was initially involved in Medjugorje in Yugoslavia and is now in Africa. 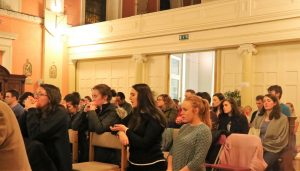 Present for special spiritual moments were Fr Paschal McDonnell OFM, and Fr Seán Kelly OFM Cap, who is the Provincial Vicar of The Irish Capuchin Franciscans and Guardian of the Kilkenny International Capuchin Community. Rev Dr Eunan McDonnell SDB PhD, Spiritual Director to the Divine Mercy Conference Committee, and currently the Salesian Provincial of St Patrick’s Province (Ireland & Malta) offered healing services at the main conference and at the special youth event which preceded the conference.

The Divine Mercy Youth gathering was held on 16th February, at St Paul’s Church, Arran Quay in Dublin. The evening included music, testimonies, inspiring talks and healing. The keynote speakers were Ralph Martin and Keith Kelly. Fr Eunan McDonnell provided a healing session which included the sacrament of confession. During the service the young people chose a stone and left it behind as a way of letting go whatever was holding them back.