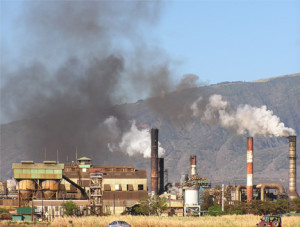 The global climate campaign 350.org and partners have launched a new campaign urging Pope Francis to divest the Vatican Bank of all its investments in the fossil fuel industry and to publicly support the growing movement to divest from fossil fuels.

The petition sent to the head of the Pontiff states: “Your acknowledgement of the dire threat of climate change, the Vatican’s efforts to become the first carbon-neutral state, and your dedication to caring for Creation give us great hope.”

“We urge you to use the power of your office to set an example for the world.”

Pope Francis has been outspoken about the threat of climate change, calling environmental destruction a “sinful act”.

On 14 May this year during the General Audience, he warned that, “If we destroy Creation, Creation will destroy us,” and appealed to Christians to become “Custodians of Creation”.

Pope Francis is also in the process of writing an encyclical, one of the highest forms of Catholic teaching, on humanity’s role in caring for the Earth.

He has also initiated a radical overhaul of the Vatican bank to increase transparency, accountability and tackle corruption. The Vatican bank has holdings of $8 billion.

As long as fossil fuels are not explicitly excluded, a part of these holdings are inevitably invested in fossil fuel companies.

Jamie Henn, 350.org’s Director of Strategy and Communication said, “Pope Francis understands the threat of climate change and our moral responsibility to act. We urge him to take appropriate steps to stop the Catholic Church from fuelling the climate crisis through its investments, and use the power of his office to call on Christians and non-Christians alike to align their investments with their values.”

The petition follows a letter to the Pope from religious groups in Australia and North America saying that it’s “immoral” to profit from fossil fuels and asking him to advocate for divestment from fossil fuel.

Last month, the World Council of Churches, a fellowship of over 300 churches, which represent some 590 million people in 150 countries, decided to phase out its holdings in fossil fuels and encouraged its members to do the same.

The Quakers in the UK, the Anglican Church of Aotearoa, New Zealand and Polynesia, the United Church of Christ in the USA and many more regional and local churches have also joined the divestment movement.

Archbishop Tutu’s call to action has been echoed by UN climate chief Christiana Figueres, who urged religious leaders to pull their investments out of fossil fuel companies, as well.