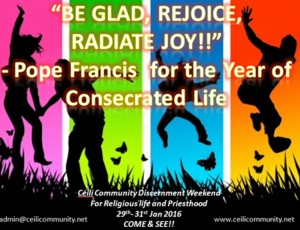 Be glad! Rejoice! Radiate joy! is the theme for a discernment weekend for religious life and priesthood which began last night and runs for the weekend (29 – 31 January 2016).

The weekend is run by the Céilí community, a task oriented community directed at evangelisation based in Kilbeggan, Co Westmeath.

Nine people are due to take part in the weekend – four men and five women. Most are Irish.

In June 2015, Bishop Michael Smith of Meath granted the community canonical status as “a Public Association of Christ’s Faithful” which enables it to now have its own priests and religious.

Currently the community, which is made up of lay and religious members, led by Mgr Pat Lynch has a pre – postulancy, postulancy and novitiate programme for both priesthood and religious life.

Priests and religious who go through their programme are trained for the Céilí community.

This is the first time the community is running a discernment weekend for those interested in finding out more about their way of life who might pursue priesthood or religious life within the community. 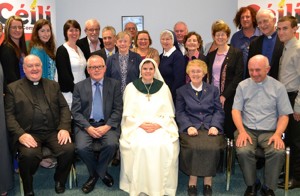 The weekend discernment will take place in the community houses in Horseleap and in Mullingar in Co Westmeath.

Sr Enda said she hoped the weekend would give the participants “some insight into Priesthood and Religious life within the Céilí community and this may help them in their journey of discerning their vocation.”

The Céili Community was established by Mgr Pat Lynch in 2000.

Its name comes from “Céilí Dé” – the Community of God, a name given to early followers of St Patrick.

It is made up of members – priests, religious and lay people – and a wider group of ‘Cairde Ceílí’.

Up to late last year, the community worked out of two community houses, one in Horseleap, the other in Mullingar, but on 8 December 2015, the Sisters of Mercy convent in Kilbeggan was handed over them and following renovations, the community plans to move there sometime later in 2016.

The community’s tools for evangelisation are parish and school missions.

According to Mgr Lynch, in 2015 their visitation, school, and parish teams took the “Good News of Jesus Christ” to at least 15,000 people throughout Ireland through eight parish and many school missions.

Already the 2016 diary is full “delivering missions relevant to the Year of Mercy”.

“Thousands of seeds have been sown,” he said. “God has given us more than enough signs to encourage us – people coming back to the Lord through individual confessions after a long time away, people reporting that their weak faith had been renewed and reinvigorated, and even priests of the parishes refreshed and encouraged in their ministry.”