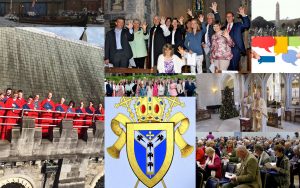 A number of key events are planned to mark the Church of Ireland Dioceses of Dublin and Glendalough 800 years as United Dioceses which gets underway in October.

This historic centenary will be marked and celebrated beginning in the Octave of Laurence O’Toole, the patron saint of Dublin.

An ecumenical festival evensong in Christ Church Cathedral is due to take place on the eve of the Feast of St Laurence O’Toole, (Sunday 13 November) and will be attended by members of the dioceses as well as ecumenical and inter faith guests.

All weekday cathedral services during that week will reflect Laurencetide and Dublin and Glendalough 800 themes.

The week will conclude with a diocesan ‘Come and Sing’ festival evensong at Christ Church Cathedral on Sunday 20 November to which singers from every parish will be invited to sing with the cathedral choir.

The Octave of St Laurence O’Toole will also provide the backdrop for a Week of Exploration of 800 years.

This will include a series of lectures on Dublin and Glendalough 800 organised and hosted by the Christ Church Library and Archives Committee.

On the Feast of St Laurence O’Toole, (Monday 14 November), schools in the Dublin 8 area will be invited to visit Christ Church Cathedral for a small exhibition on the patron saint of Dublin and a tour of the cathedral.

The week will also see the launch of ‘A History Trail of the United Dioceses of Dublin and Glendalough’.

This will be a downloadable image based trail of objects and places of historical significance, nominated by the people in the Dioceses, that will traverse and highlight the urban and rural areas of Dublin and Glendalough.

It will consist of a series of numbered images of the objects and places of interest and an illustrated map to show where they are to be found.

As part of the 800th anniversary celebrations Dublin and Glendalough’s links with other dioceses will be highlighted.

The Anglican dioceses of Spain and of Portugal view the Dioceses of Dublin and Glendalough as their mother diocese.

The history of this relates to Archbishop Plunket and Archbishop Gregg.

The current Archbishop of Dublin, Archbishop Michael Jackson, was the chief consecrator of the Bishop of Portugal and has attended and spoken at the General Synod of the Church of Spain.

The Spanish and Portuguese bishops will attend both the diocesan synods and the National Schools Service.

Further events are planned for 2017 including a diocesan national school choral competition to be held in March 2017.

It is envisaged that preliminary rounds will take place in February 2017.

Details and application forms will be sent to schools in time for the start of the 2017/18 school year.