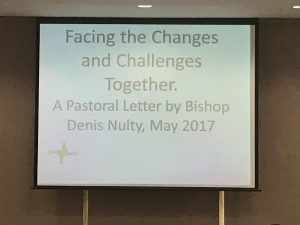 Bishop Denis Nulty has stated that by summer 2019 priests in his diocese aged 75 and over can stand down from all parish administration work and lay people can take on those administrative duties.

Retiring priests are “obviously most welcome to continue celebrating Masses, working as chaplains in schools and hospitals, pastorally ministering in the parish but not carrying the burden of administration – it’s simply not fair. The reason I’m suggesting a two-year lead-in to this recommendation is that it will allow lay people to be trained up in all aspects of parish administration,” said the Bishop of Kildare and Leighlin.

He also suggested that priests should take sabbaticals and lay people take up roles in catechesis, contemplation and evangelisation. Reluctant to close churches, he did not rule out clustering of parishes in what he called an “era of fewer priests”.

He was speaking at a meeting following on from his Pastoral Letter on Good Shepherd Sunday in which he spoke of the shortage of priests, with 90 priests ministering in the Diocese of Kildare and Leighlin, of which 27 are over 75, and 12 are over 80.

Bishop Denis Nulty acknowledged the journey of the diocese in discerning the future, with no less than four previous initiatives between 1998 and 2011. He noted that the introduction of the Permanent Diaconate has been positive and said that all parishes need to continue to keep vocations to the priesthood to the forefront of prayer.

He encouraged those present to remain positive and highlighted that there has been one ordination for the diocese each year for the last two years. However, he said that even if this continued every year, the diocese would still be playing “catch up”.

“The involvement of a very large number of lay people who are so actively engaged in the life of their parish and their diocese offers more hope. Kildare & Leighlin has a proud tradition of lay ministry – lay people, women and men who step up to the plate in the delivery of services through their various liturgical, educational, social and administrative involvement,” he said. 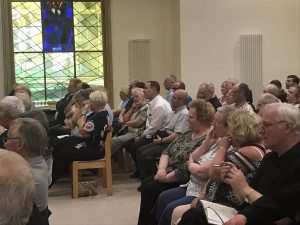 Vatican II’s Lumen Gentium offered a powerful vision of Church and a radical call to discipleship, he said, and this can be achieved through the universal call to holiness, as “each person will find a pathway to holiness, that is for every person, personal and unique.”

He said that the Bishop of Evreux told Limerick priests that the Church is not dying, but the model of Church is.

“The present situation of the shortage of vocations, the age profile of the priests and the stress associated with such realities needs serious reflection,” said Bishop Nulty.

He then quoted the 1983 Code of Canon Law and the Vatican II Decree on the Ministry and Life of Priests, which address the possibility and reality for some dioceses of the shortage of priests.

Canon 517 of the 1983 Code, Paragraph 1 states: “Where circumstances so require, the pastoral care of a parish, or of a number of parishes together, can be entrusted to several priests jointly, but with the stipulation that one of the priests is to be the moderator of the pastoral care to be exercised. This moderator is to direct the joint action and to be responsible for it to the Bishop.”

Paragraph 2 adds that “if, because of a shortage of priests, the diocesan Bishop has judged that a deacon, or some other person who is not a priest, or a community of persons, should be entrusted with a share in the exercise of the pastoral care of a parish, he is to appoint some priest who, with the powers and faculties of a parish priest will direct the pastoral care”.

Bishop Nulty offered several recommendations and asked for full engagement of all parishes in a diocesan consultation and what he called the “discernment journey”.

His first proposal was to ensure that every priest who has reached the age of 75 can stand down from all parish administration work.

Secondly, he called for every parish to have a team of lay people working towards the shared goal of collaborative leadership by autumn 2018. Not every parish has a parish pastoral council; nor are they all the same. He cautioned against pigeon-holing lay people into an “existing clerical model of leadership” or neglecting new roles like teaching, catechesis, contemplation and evangelisation.

Thirdly, he encouraged priests to avail of a sabbatical which “re-energises not only the priest who takes it but the whole diocese”.

His final recommendation was not to close churches as far as possible, but to review Mass times in conjunction with neighbouring parishes or cluster groups.