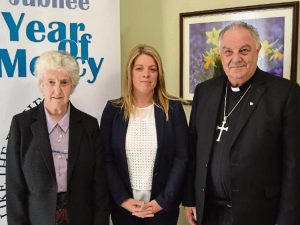 Bishop Seamus Freeman of Ossory has appointed a coordinator for his diocese’s newly developed pastoral plan.

In 2004, Ossory brought together a group of laity and clergy in three deaneries with the intention of establishing and supporting a network of pastoral councils at parish, deanery and diocesan level.

It was from the members of these groups that the call for a pastoral plan for the diocese emerged.

They believed that if priests and people are to work together effectively they needed an overall plan to focus and guide this work.

After many drafts and much discussion throughout the diocese, Bishop Freeman ratified the Ossory Diocesan Pastoral Plan.

A native of Kilkenny city, Gemma Mulligan now lives in Tullaroan with her husband and family. She previously worked for Catholic Youth Care in the Archdiocese of Dublin.

A member of her own parish council in Tullaroan, she has been chairperson of the diddle deanery pastoral council for the last three years.

She is also a member of the diocesan retreat team that animates the reflection evenings for parishes at St Kieran’s College.

As part of her role she will be inviting all those who care about the future of the Church to become actively involved in shaping it.

Her task as plan coordinator will be to help support the work that is already being done in parishes and to offer the vision and leadership that will enable priests and people to adapt and make the changes needed so that parishes continue to be vibrant faith communities in an era of rapid change.