Home > Featured > Diocese of Clogher “has lost a great servant”

Diocese of Clogher “has lost a great servant” 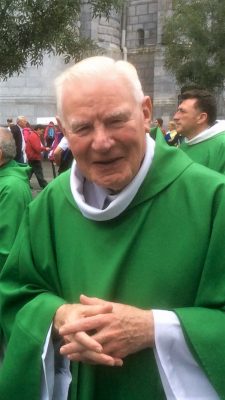 The Diocese of Clogher’s retired bishops joined Bishop Larry Duffy in paying tribute to Monsignor Sean Cahill, a former Vicar-General and past President of St Macartan’s College in Monaghan.

His funeral Mass will take place on Friday 24 July, the day he would have celebrated the sixtieth anniversary of his ordination to the priesthood.

In a statement, Bishop Duffy said Clogher had lost “a great servant” and he described Msgr Cahill as a priest who had given service to the Lord through his priesthood and through leadership in both education and parish life.

Msgr Sean Cahill was the retired parish priest of Enniskillen.

“Monsignor Sean was one of the giants of the diocese in his time. Throughout his sixty years of priestly ministry he gave generous service to God’s people through teaching, education leadership, parish ministry and assistance at diocesan level,” Bishop Duffy said.

He noted that the former vicar general of Clogher diocese had begun his ministry just as the Church was preparing for Vatican II.

“He witnessed many changes in the Church and in wider society and he negotiated all these in his own inimitable way – always prayerfully and with great energy.”

He said Msgr Cahill had high standards and expected those who worked with him to do their very best to attain those same standards of service to the people of God.

“He always saw this as a response to the call that he and all of us receive through our baptism. It was that same sense of vocation that enabled him to contribute immensely to important developments in the fields of education, marriage and the family, vocations to the priesthood and also in the area of inter-Church dialogue.”

His ministry in Enniskillen took place against the backdrop of some of the most difficult days of the Troubles, “especially at the time of the Remembrance Day bombing in Enniskillen in 1987”.

“His faith-filled compassion and leadership, together with his outgoing and gentle personality, touched the hearts of many people, regardless of  religious background. He walked with people in ‘the joys and hopes, the sorrows and anxieties’ of life,” Bishop Duffy said.

He expressed prayer-filled sympathy on his own behalf and on behalf of Bishops-emeritus Duffy and MacDaid to Msgr Cahill’s family and to the communities in Enniskillen, Lisbellaw and Maguiresbridge where he ministered. He noted that Msgr had worked closely with Bishops Duffy and MacDaid.

Born on 25 April 1934, the Sean Cahill was educated at Monaghan CBS and later at St Macartan’s College.

He studied for the priesthood at St Patrick’s College, Maynooth after which he was ordained by Bishop Eugene O’Callaghan on 24 July 1960.

From 1960, Fr Sean Cahill was a member of the teaching staff of St Macartan’s College, Monaghan, and President of the College from 1974 until 1981.

He was appointed parish priest of St Michael’s, Enniskillen in August 1981 and served there until his retirement in 2007.

He was given the title Monsignor in 1981, and served as Vicar General of Clogher from then until 2010.

Following his retirement as parish priest, he ministered to the people of Maguiresbridge in the parish of Aghalurcher, Co Fermanagh until 2018, during which time he undertook the role of Diocesan Director of Vocations.

Msgr Sean Cahill was brother of the late Fr Martin Cahill, a priest of the Diocese of Clogher who died in Magh Ene (Bundoran-Ballyshannon) parish in 1988.

He is survived by his brothers Hugh and Owen, his nephews and niece and a wide circle of friends.

Due to the Covid-19 restrictions, attendance at the funeral will be restricted.

Msgr Cahill’s body will be removed to St Michael’s Church, Enniskillen on Thursday evening, to arrive at 6.30pm.

His Funeral Mass will take place on Friday (24 July) at 12 noon, followed by burial in the Convent Cemetery, Enniskillen.

The funeral liturgies will be broadcast via Enniskillen parish website: http://www.saintmichaels-parish.com/