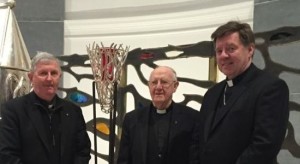 St Mel’s Cathedral in Longford has been gifted a new silver sanctuary lamp by the Diocese of Meath in recognition of the friendship between Ardagh & Clonmacnois and Meath as well as the cathedral’s incredible resurrection from the ashes.

Over Christmas, Bishop Michael Smith visited Longford’s ‘Phoenix’ and presented the gift to Bishop Francis Duffy on behalf of the people and parishes of the neighbouring diocese.

According to the Diocese of Meath, the gift is a symbol of solidarity between the dioceses in the midlands.

St Mel’s Cathedral was devastated five years ago when fire destroyed the interior of the building, and almost all of its furnishings and fittings.

“The determination of the bishops, priests and people in the Diocese of Ardagh & Clonmacnois to restore St Mel’s Cathedral is a source of encouragement and a sign of faith in the community”, Bishop Smith said.

“The sanctuary lamp is an invitation to prayer and a call to reverence the Blessed Sacrament, which is at the very heart of the Church”.

After a massive €30 million renovation programme, using the latest building technology and the skills of master craftsmen and contemporary artists, St Mel’s Cathedral was officially rededicated on Sunday 17 May 2015.

Bishop Duffy described the occasion as “a story of transformation from a shell to a beautiful and elegant sacred place.”

On Christmas Day 2009, the historic 174-year-old cathedral was burnt to a cinder. After the initial shock, immediate efforts were made to secure what remained so that no one could be injured by falling debris.

A massive €30 million renovation programme was undertaken with the aim of reopening for Christmas 2014. In the meantime, Mass was held for the faithful in St Mel’s College.

The inspiration and vision for the renovation was Bishop Emeritus Colm O’Reilly who in the midst of the ashes, flames and dilapidation said St Mel’s would be rebuilt.

“There was a clear sense of devastation and sorrow among the people. One voice was clear about what would happen, Bishop Colm. He said that St Mel’s would be rebuilt,” Bishop Duffy said in a tribute to his predecessor.