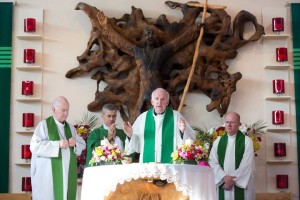 The parish priest of one of the most disadvantaged communities in the country has said it is “very appropriate” that the Diocese of Limerick is celebrating Synod Sunday in a “community where unemployment, state neglect and marginalisation are strong features”.

Welcoming Bishop Brendan Leahy’s attendance at 11am Mass in Corpus Christi Moyross today, which will be broadcast live over the internet via Church Services TV and also on RTE Radio, Fr Tony O’Riordan told CatholicIreland.net that such gestures and symbolism must go deeper.

He suggested that the Church must commit itself at a diocesan level “to challenge the authorities and decision-making that continue to fail so many children and families in communities such as Moyross”.

The Jesuit priest said it was his “firm belief” that the Church will miss the point of renewal and the real source of a God-given basis for renewal if it does not “immerse itself in the daily realities of people who daily struggle to affirm their dignity through the efforts they make to overcome the evil that blights their lives”.

If Church authorities can get the smell of the lives of people and daily reality (to use Pope Francis’ image) in areas of concentrated poverty and exclusion then this will lead to a conversion that will invigorate the preaching of the Gospel, he said.

“Without allowing the concerns and realities of the poor to seep into its veins and consciousness, Church attempts at renewal are but organisational changes, not an enlivening by the Spirit arising from encountering the crucified one now risen and living in the poorest of our brothers and sisters,” the parish priest warned.

Sunday 8 February has been designated as Synod Sunday for the parishes of the Diocese of Limerick.

Parishes have received resource material for the liturgy today which will serve to raise awareness around the 2016 Synod.

According to the pastoral development team in Limerick “It will be an opportunity for each parish to formally introduce their delegates and for parish delegates to speak at Masses to outline the next phase and its implications for parishes”.

A gathering of all synod delegates took place on Saturday 31 January in Limerick during which training was facilitated by Christopher Schoch, who is based in Clermont-Ferrand, France.

Synod Director, Fr Éamonn Fitzgibbon gave a brief input in which he teased out further the role of the delegate, in particular the difference between being a ‘representative’ and ‘speaking from the perspective of’.

He also outlined that this phase is really about discovering where the Kingdom of God is breaking in on our world or where the Spirit is active – essentially what God is doing in Limerick at this time.

Christopher Schoch introduced the concept of ‘hunter-gatherer’ as an image for delegates and also presented an emergent strategy or ‘fruitful-emergence’ as a way of bringing the process forward.