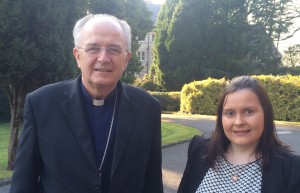 Bishop Leo O’Reilly has announced the appointment of a new youth director as part of the diocese of Kilmore’s implementation of the outcomes of the 2014 ‘Listening Process’.

Carina McGinnell, who is a native of the parish of Denn, takes up the role of Diocesan Director of Youth and Young Adult Ministry.

She studied in Loreto College Cavan before undertaking third-level and post-graduate studies at the Mater Dei Institute of Education, graduating in 2009 with a Bachelor degree in Education with English and a Masters in Religious and Education in 2010.

Since then, she has taught in a number of schools including Loreto College and Breifne College in Cavan, St Clare’s College in Ballyjamesduff, Ratoath College and St Joseph’s Mercy Secondary School in Navan.

She is also very involved in her local parish where she is a Minister of the Word and a member of the liturgy group.

In addition, she plays an active role in her local community, especially Denn GFC of which she is Vice-Chairperson.

Making the announcement, Bishop O’Reilly said that he welcomed Carina’s appointment to this very important role in the diocese.

“The Diocesan Assembly of 2014 and the Listening Process which preceded it identified ministry to the young people of Kilmore as one of the four broad areas of pastoral action to be addressed in the coming years.”

“This was subsequently highlighted as one of the main priorities of the Diocesan Pastoral Plan for 2015-2020.”

He said Carina’s appointment would build on the good work already undertaken with young people in schools and parishes throughout Kilmore.

He added that through her work a more structured and focused ministry to the youth and young adults of the diocese would emerge.

As she took up her appointment, Carina said that she was “looking forward to working closely with the priests and young people of the diocese, with diocesan personnel and those engaged in youth ministry in parishes, and with the chaplains and catechists in the schools of the diocese especially in relation to faith formation, various activities and training, the extension of the Pope John Paul II Awards and the forthcoming diocesan pilgrimage to Poland next July for World Youth Day in Krakow.”

“The role”, she said, “will be challenging and fulfilling but one that I am looking forward to with enthusiasm, faith and trust”.

Carina may be contacted at her office in the Kilmore Diocesan Pastoral Centre Cullies, Cavan: Telephone 049 4375004 (Extension 103) or Email [email protected]