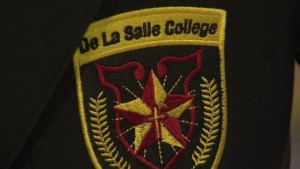 The trustees of a West Belfast school have appealed for a “stable and supportive” environment within the troubled school.

The trustees of De La Salle College, who own the school on behalf of the Catholic Church, have appealed for calm despite ongoing industrial problems at West Belfast’s largest post-primary school, over the past few months which has seen a number of parental protests.

The dispute centres on a number of disagreements between staff and management.

In a statement this week, Fr Timothy Bartlett, episcopal vicar for education in the diocese of Down and Connor said, “On behalf of the diocesan trustees, I encourage everyone associated with the school to work collaboratively to ensure a stable and supportive teaching and learning environment both within and around the school as young people prepare for their examinations.”

Fr Bartlett added, “This includes dealing with any recently publicised issues regarding the school in a calm, constructive manner that does not impinge on the operation of the school or distract pupils, families, staff and management from providing the best possible support to pupils in this critical final term.”

A range of meetings have been held involving school staff, governors, the Council for Catholic Maintained Schools (CCMS) and the teaching unions.

In January 2016, a strategic plan for renewal was drawn up and a strategy group was established “to address a range of issues raised by staff relating to the operation of the school”.

The plan had a number of action areas, including a review of staff structure and line management, a review of pastoral care including safeguarding/pupil discipline procedures and serious incident processes, a review of “staff welfare policy” and mechanisms for “raising and resolving staff concerns”.

It is believed that there have been delays in the implementation of that action plan.

In an effort to address the issue, the Council for Catholic Maintained Schools appointed an associate principal to help address problems which have affected the school, and this led to its head boy issuing an open letter to the board of governors about the impact the disruption was having on him.

Speaking about the appointment, Fr Bartlett said the new associate principal “will support and advise the leadership and management of the college, including the governors, on the day-to-day operation of the school and in addressing any issues giving rise to concern”.

A group representing parents of some pupils has held a number of demonstrations outside the school in recent weeks.

The Concerned Parents Committee of De La Salle has called for some of the management team at the school to be stood down.

They also called for a “thorough independent and transparent investigation” of events at the school.

They plan to hold further meetings for parents and a public rally to highlight their concerns associated with the running of this school and direct impact on the education and well-being of the pupils.

The Irish National Teachers’ Organisation (INTO), which represents the majority of teaching staff in the school, said they were attempting to address a number of ongoing issues.

The union’s northern secretary, Gerry Murphy, said, “INTO is increasingly concerned with the slow progress towards a resolution, and is now considering further targeted industrial action within the school.”

Meanwhile, the CCMS said they were continuing to work with the board of governors, the principal and teacher unions to reach a resolution.