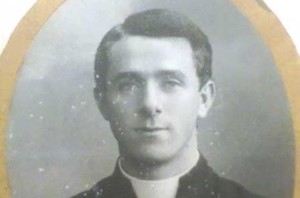 “We should never glorify war – war is always an admission of the failure of politics,” Archbishop Diarmuid Martin of Dublin said on Monday evening as he launched the online digitised collection of First World War priest, Fr Francis Gleeson.

The documents, which comprise diaries and letters which were sent to the chaplain of the Munster Fusiliers at the front, are the first items from the archive of the Archdiocese of Dublin to be made available online to researchers throughout the world.

The priest’s diary entries, as well as the letters from the families of soldiers fighting in the trenches, provide a poignant insight into life on the battlefields of the Great War and the longing for news among these families.

The launch in Clonliffe College was attended by Teresa Phelan, a great niece of Fr Gleeson as well as her son Damian Phelan.

In his address, Archbishop Martin referred to the extracts from Fr Gleeson’s diaries which he said “speak of the horrors of war” and at the same time “the extraordinary face of human solidarity that appears amid all the bloodshed and violence, the fear and the solitude that belong to any war.”

He said such horrors did not mean the courage and bonds of caring and solidarity that take place in war should be overlooked.

“We owe a deep debt of gratitude and recognition to those who find themselves taking on the burden of war and especially those who give their lives for our liberty.”

The Archbishop recalled the words of two popes, Benedict XV who at the height of World War I called war “a useless massacre” while Paul VI exhorted at the UN “War never again.” 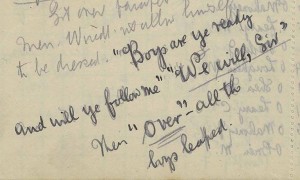 Of Fr Gleeson, Archbishop Martin described him as “a priest with extraordinary human qualities; a humble priest whose faith enable him to do great things in war and peace”.

Fr Francis Gleeson was depicted in the painting ‘The Last General Absolution of the Munsters at Rue du Bois’ by Fortunio Matania giving absolution to the Royal Munster Fusiliers before the Battle of Aubers Ridge in France in 1915.

A native of Templemore, Co Tipperary he was ordained in St Patrick’s College Maynooth in 1910. He was the first Irish catholic priest to volunteer to go to the front.

One extract from Fr Gleeson’s diary written in May 1915 states:

“Spent all night trying to console, aid and remove the wounded. It was ghastly to see them lying there in the cold, cheerless outhouses, on bare stretchers with no blankets to cover their freezing limbs. … Hundreds lying out in cold air all night at Windy Corner. No ambulances coming. They come at last – at daylight.”

The roll-call of the Munsters on Monday was the saddest thing imaginable.  In the field beside ‘St Mary’s’ (the little tent-chapel the artillery chaps erected for us) the four Companies all sat round on the dry grass. One Company was called at a time. Everybody was worn, sad, depressed, after the loss of so many loved comrades. Some had lost brothers, others cousins, but all had lost good and faithful companions. The Sergeant Major called out name after name. ‘Killed’, ‘Wounded’, ‘Missing’ was answered according to the fate of each.

According to Noelle Dowling, Dublin diocesan archivist, the Fr Gleeson collection consists of 30 items in total. These include diaries, bridge roll books, letters and miscellaneous notes. She and volunteer archivist, Peter Sobolewski, transcribed all of these items and then gave the material to UCD Digital Library who digitised them into 670 files which can be accessed by researchers all over the world.

At the launch, the following extracts from Fr Gleeson’s diaries were read out.

“Rivers of mud and muck; such desolation, such suffering. If militarists had hearts at all they should bleed if they saw the scene of frozen men that I saw today.”

On Christmas Day 1914, the priest wrote: “What a little gem that portable altar is that I got from Burns & Oates in London. In a few minutes almost 250 or 300 Munsters were assembled outside the shattered and horrifically upset house and I went on with the Mass. Bullets whizzing over our heads the whole time – during the consecration several bullets passed by. The morning was densely foggy so we were quite free from airplane observation otherwise we should have been shelled mercilessly. What a strange Christmas morning. Such an historic one for me and the fine Church of England chaplain who gave his services to the Welsh regiment.”

Tuesday 29 December: “I met several of the men who had just come from the trench – they were the pitiable and heart rendering sight. Steeped and soaked in mud to the loins. … This is fighting under the most appalling conditions.”

The Fr Francis Gleeson collection can be accessed here: http://digital.ucd.ie/view/ucdlib:36570