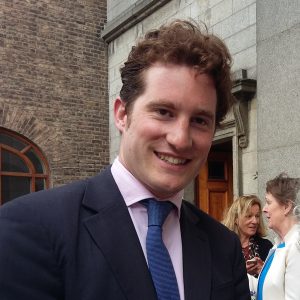 He was not the centre of attention himself; rather it was his uncanny resemblance to his great great grand-uncle Blessed John Sullivan SJ that was attracting people’s attention.

A graduate of Trinity College Dublin, now working in finance in the City of London, Hector travelled from Britain with his father Peter Lloyd, his mother Sheila and his brother Jolyon for the ceremony at Gardiner Street church.

Speaking to CatholicIreland.net, Peter Lloyd said Fr Sullivan showed “We can all learn a lot about working together.”

He said the saintly priest’s goodwill towards everyone and his uniting of Catholic and Anglican traditions was symbolised by his Anglican relatives presenting a family cross during the beatification ceremony.

The cross had belonged to Fr Sullivan’s Catholic mother and the priest had used it all his life as he ministered to the poor and the sick.

“Fr John Sullivan’s mother was a devout Catholic and she had a very strong influence on him. That cross that we carried up during the ceremony was his mother’s cross and it is the one that he most closely identified with – it was an item he always had with him,” he explained.

Asked about the resemblance between his older son and Fr Sullivan, he said it was partly the reason they were at the ceremony.

“It was my mother’s sister, a lady called Jean Barrett, who spotted the resemblance between my son Hector and Fr John Sullivan. She knew Fr Conor Harper and it was through her really that the contact was made. Sadly she died last year.”

Jesuit Fr Harper is the vice postulator of the cause of Fr Sullivan, who is now one miracle away from sainthood.

Peter Lloyd also paid tribute to the support and excitement of the devotees of Fr Sullivan, describing them as “fantastic”.

“To see their hopes and dreams for Fr Sullivan come to fruition has been most satisfying for us,” he said.

In his address during the ceremony – which was presided over by Vatican Cardinal Angelo Amato as well as Irish bishops and Jesuits – the Church of Ireland Primate Archbishop Michael Jackson described the ecumenical occasion as a “day of celebration and joy” in the context of the “unending need for reconciliation in Ireland”.

In an unprecedented ecumenical gesture the request for beatification was made by the Church of Ireland and Catholic Archbishops together, reflecting the fact that Fr Sullivan was an Anglican for the first half of his life and Roman Catholic for the second. 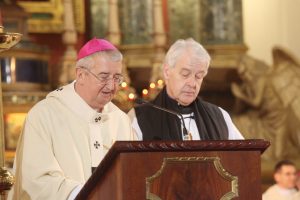 Speaking to Catholicireland.net after the ceremony about the closeness which Fr John Sullivan brought about between the two religious traditions, he said it contained a message for politicians in Northern Ireland.

“What happened in Gardiner Street church would have seemed impossible in times when people didn’t actually really relate to one another in a way that is friendly, positive and constructive for others,” he said.

Of Blessed John Sullivan’s relevance for the island of Ireland post Brexit, Dr Jackson said, “One of the things I think is very important to hold on to is the conviction that what unites us is more important than what divides us. I think a number of things unite and come together today – one is the fact that John Sullivan spent 37 years of his life as a member of the Church of Ireland and 37 as a member of the Roman Catholic tradition.

“He is associated with two educational establishments – one of which is Portora Royal School in Enniskillen and the other is Clongowes Wood College – one of those is in Northern Ireland and one is in the Republic.”

In his reflection after communion, Archbishop Jackson said Blessed John Sullivan had a “special place in the hearts of all of us who are members of the Church of Ireland and of all of us who have an association with Portora Royal School and Clongowes Wood College.”

He described the beatification as a “day of fruitfulness and discernment, the harvest of faith and action, of mercy and justice, of pastoral care and teaching commitment in a human life lived for others in obedience and service of God and neighbour, young and old, rich and poor.”