‘He was devoted to his own family and the SVP family’ 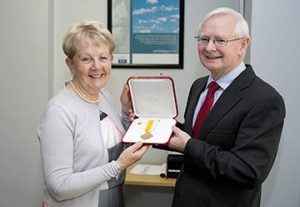 In a statement, President Higgins described the longstanding member and public face of the SVP as “a passionate advocate for the importance of education, and an ethic of care” throughout his career.

He said that through his work with the Society of Saint Vincent de Paul, Professor Monaghan set “a powerful example of practical solidarity and inclusiveness, working to improve the welfare of those most in need”.

“His loss will be felt most acutely by his wife Catherine and the members of his family. It is to them, and to all those who had the privilege of knowing and working with John Monaghan, that I send my deepest condolences.”

Kieran Stafford, SVP National President said, “Throughout his active life he was devoted to his own family and the SVP family.”

John Monaghan grew up in Drimnagh in Dublin. He left school at 14 and began work as a mechanic at a local garage.

He later attended Bolton Street to study to be a mechanic. In 1967, he was appointed part-time lecturer in the engineering department at the college.

His career continued to blossom and he was later appointed Professor of Mechanical Engineering in Trinity College where he was also elected a Fellow in 1993. He was a Fellow of Engineers Ireland and a Chartered Engineer.

He was the author/co-author of over 200 journal/conference papers and over 100 research reports.

He was Awarded Hon DPhil by DIT in 2013. In addition he was awarded the William Johnson International Gold Medal for Research and Teaching in 2014.

In tandem with his expertise in engineering, he was also a social policy advocate. He served on the Board of Combat Poverty Agency (2005 – 2009) and was a Member of Bishops’ Commission for Justice and Peace (2010 to 2013).

John Monaghan joined the SVP in 1985 and was an active member of his SVP Conference in Leixlip, Co Kildare and a member of the National Management Council from 1996-2014 and he also served as national vice president.

In a statement, the SVP said that as the media voice and face for the organisation for 15 years, “he was seen as a credible and authentic voice for SVP views on poverty, injustice and inequality”.

In 2014, Prof Monaghan was awarded the Pro Ecclesia et Pontifice (the highest papal honour that can be bestowed on a layperson) for his work in SVP and promoting social justice issues in Ireland.

Kieran Stafford, SVP National President said in his tribute: “John was a compassionate, non-judgemental and caring person who has influenced and inspired many SVP members. I had the privilege of serving with him for eight years as a trustee of SVP and in that time his calm intelligent counsel aided some very tough decision-making. He was a truly exceptional member of SVP and has changed so many lives for the better.”

“Every day he used his talents to advocate for Social Justice in our world, my last conversation with him was on that very subject. Those of us who had the honour to serve with him will never forget his dedication to help those in need and bring about an end to poverty. He embodied the true Vincentian spirit.”

“He developed and led the SVP National Social Justice and Policy Committee from the late 1990s until 2012. It was a role which enabled the Society to carry out its policy development and advocacy work with Government, media and wider civil society.”

“From 2012-2014 he continued to help train new SVP members. His guidance, wisdom and hard work as a volunteer and member of the National Board was truly a huge benefit to the Society and those it served.”

“His unselfish attitude is shown in his own words in an interview for the SVP Bulletin in 2014, ‘I believe that over the years I have gained and learned so much more from the people that I have had the privilege of meeting than they have gained from me. When you see the bravery of people in difficult circumstances, the unseen heroes, thousands of them that we meet every night of the week, they are the people who make it all so important.’”