Home > News > Develop your heart during Year of Mercy

Develop your heart during Year of Mercy 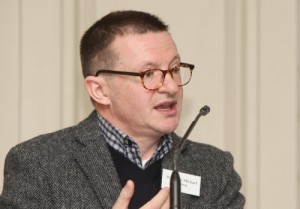 You might be a brilliant doctor or scientist but it does not mean you will live a meaningful and enriching life.

Professor Conway told the members of Catholic ecclesial movements and communities that in our culture enormous emphasis is placed on educating minds to be “successful” but little energy is put into developing hearts towards “simplicity, integrity and fulfilment”.

The heart is the place of your soul, said Professor Conway, where your identity is fashioned.

A developed heart is essential in terms of living with integrity, flourishing as a human being and finding “an authentic expression of who you are”.

The priest from the Galway diocese said he was “very concerned” that because of an over reliance on technology and social media, “we are losing, in a de-stabilising way, our sensitivity to the fullness of human encounter”.

If he stood outside a supermarket some afternoon and asked shoppers coming out about who had served them would anyone be able to answer his questions “Was it a boy or a girl? What form were they in?”

“I would wager that most people would not be even able to describe the person,” he suggested.

“Increasingly we live in our heads. We relate to each other from our heads. When we have problems we go into our heads to solve them so that our sense of ourselves is limited to what goes on or does not go on in our minds.”

This has consequences for our relationships, resulting firstly in a dismissal of the “richness that goes with the communication” of the heart, even things like “smell, skin-tone, touch and personal rhythms”.

“These and other such phenomena are powerful modes of communication that we are being taught to ignore, mistrust and even treat as unreal. I think this is a great loss when it comes to the dynamic of concrete relationship and above all when it is a matter of love.”

Secondly, dwelling “exclusively” in our heads, people see themselves and others as objects.

“A person can easily fall into a simple category of the mind – a traveller, a homeless person, a refugee, a priest, a teacher, a student, a client and so on.”

We do not encounter the concrete person who is present to us, for us and even in us, he said.

Dwelling in the mind is a way of self protection and perhaps we “need that protection because our hearts are not capable of meeting the other heart to heart. Our hearts are underdeveloped.”

Quoting Pope Francis who said the Christian heart is always open and not “closed in on its own selfishness”, Professor Conway said that for the Year of Mercy people might pay more attention to the heart as well as the mind.

“I believe it is vital these two go together.” When you encounter another human being, it is not just a meeting of minds. It is a meeting of whole persons.

“When we meet and engage with another person we are each of us transformed by whatever happens between us. The encounter is just as much about yourself, your identity as it is about the other person.”

He concluded quoting the poem ‘Visitor’ by Les Murray:

“He knocks at the door
and listens to his heart approaching.”