Home > Featured > Des was “a man of great courage”

Des was “a man of great courage” 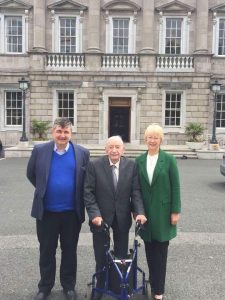 A packed congregation at the Cathedral of the Assumption in Thurles, which included Fianna Fáil leader Micheál Martin TD, yesterday heard former Senator Des Hanafin described as a man of great courage and conviction.

The Honorary President of the Pro Life Campaign passed away on Thursday last, aged 86. Speaking at Mr Hanafin’s funeral Mass, Thurles curate Fr Tomás O’Connell, who concelebrated with the Archbishop of Cashel & Emly Dr Kieran O’Reilly, said that the theme of the readings was ‘be not afraid’, and this was certainly something that could be said about Des Hanafin, who was a man “with a strong Catholic faith”.

He said that whether it was the pro life movement, the right to life or the divorce referendum, Des Hanafin always had “the courage of his convictions.”

He continued: “Des lived his life by the Christian principles of the gospel. He particularly believed in the life of the unborn.”

He added that “Certainly [Des] was a man to overcome adversity. Des never allowed defeat to stand in his way, nor did his health issues dampen his spirit in any way. Des wasn’t a man to give up, and right to the end he had an active mind; he had even begun writing his memoirs, and being a great conversationalist with a mischievous sense of humour, he was only too willing to engage in conversation with those he met.”

A number of gifts were brought to the altar during the funeral ceremony, including some transcripts of his uncompleted memoirs, which he had been working on with his god-daughter and editor of the Tipperary Star newspaper Annie O’Grady.

Other items brought to the altar were his papal award, the Order of St Gregory, a copy of the Irish Constitution to remember his political life, and a newspaper to mark his love of reading.

The eulogy at the Mass was jointly delivered by his daughter former Minister Mary Hanafin and his son former Senator John Hanafin.

His son John said that it was “the Donegal by-election in 1970 that first gave Des Hanafin a platform to air his views”. He said that when he joined the pro life movement he gave it a structure and means of communication that it previously did not have.

Des Hanafin was laid to rest at Saint Patrick’s cemetery in Thurles, where his former colleague and Galway West TD Éamon O’Cuív gave the graveside oration.