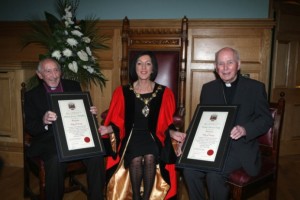 The remains of the former Church of Ireland Bishop of Derry and Raphoe, James Mehaffey, are due to be taken today from St Columb’s Cathedral, Derry, to Belfast for cremation following the 88-year-old’s funeral on Saturday.

Like his Catholic counterpart and friend, the late Bishop Edward Daly, Bishop Mehaffey was courageous in his work to bring peace to Northern Ireland and to end inter-communal violence there. Among many initiatives, the two men organised inter-church carol services at Christmas and issued a joint pastoral message every new year. Their work was recognised when both men were awarded the Freedom of Derry by the City Council in 2015.

The Church of Ireland primate, Archbishop Richard Clarke of Armagh, was unable to attend Saturday’s funeral, but a tribute written by Dr Clarke was read out to the congregation by Bishop Andrew Forster, Bishop Mehaffey’s successor.

“We all have our own individual memories of Jim, but all of us will recall with particular admiration his work – in company with Bishop Edward Daly – not only for peace but also for reconciliation in this city,” said Archbishop Clarke in his tribute. “Together they brought hope and light into communities where there was precious little of either. We all saw in Bishop Jim a gracious composure coupled with a steely resolve – the sense that this work for peace and harmony between communities so long divided was work for the Kingdom of God, and it would not be thwarted, from whatever quarter.”

The chief celebrant was the Dean of Derry, Rev Raymond Stewart, assisted by Canon John Merrick. Also participating were the former Church of Ireland primate, Archbishop Robin Eames OM, and Bishop Mehaffey’s two successors as Bishop of Derry, Ken Good and Andrew Forster. The current Catholic Bishop of Derry, Donal McKeown, also took part in some of the ceremonies, as did the Presbyterian Moderator of Derry and Donegal, Rev Colin McKibbin, and the Methodist Superintendent, Richard Johnson.

In his address, Lord Eames recalled that Bishop Mehaffey would regularly remind his fellow Christians that they were duty-bound to work for peace, with the words “Hold on, you’ve lost sight of why we’re here”.

“The reconciliation in our community, which was so fostered by Edward Daly and James Mehaffey, must never be lost sight of,” said Lord Eames. “For Bishop Jim, this was his priority as he worked with Edward and other leaders to bind up the broken, to heal the wounds of the lost, to make people remember why you are here: that in the short gift of a lifespan you must grasp every opportunity to do things for the good of all – across the barriers, across the river and across the divisions.”

That last phrase made reference to the fact that the River Foyle divides the mainly Catholic city centre and Bogside from the mainly Protestant Waterside.

In a eulogy, Bishop Mehaffey’s daughter said: “During his last spell in hospital there was a day when, in a moment of brilliant and characteristic clarity, Dad said ‘One helps the other’. May that be the profound message that we take away from our gathering today.”