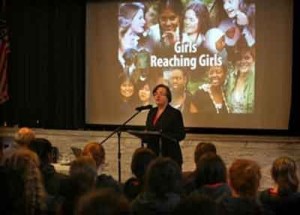 A Derry born nun who is director of Mercy Global Concern and represents the Sisters of Mercy at the United Nations in New York has just produced a new booklet ‘Mercy GPS: Our Global Positioning system’.

Sr Deirdre Mullan RSM initially had 5,000 copies of her Mercy GPS booklet printed, however demand for the book has been so great she has had to print 40,000 more.

It has now gone out to Samoa, New Zealand, South Africa, Ireland, the USA, the UK, and Australia.

Explaining the background to her book to the Derry Journal newspaper on a visit home to the city this week, Sr Deirdre said, “I did a talk in the Mercy University in New Jersey. I called it the Mercy GPS, our global positioning system for 2016. The talk was a guide to keep each of us on the path of mercy.” 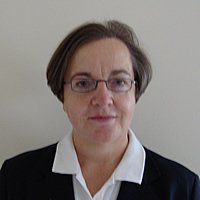 “Afterwards some of the young people stayed behind and asked me if they could have a copy of the talk. And I thought to myself that talk has really resonated with them.”

Instead of handing out copies, Sr Deirdre sent her speaking notes to the graphic designer in UNICEF and produced the booklet.

“We started with 5,000, then it went to 40,000,” she said. “The Mercy Hospital has ordered copies which have been given to every employee. It’s gone all over the world.”

Speaking about the content of the book she explained, “It is about paying attention to people, it is about being grateful, it is about recognising that while we are local citizens we are also global citizens. It’s about the importance of being a merciful person. I always say – it‘s not enough to be compassionate – you must act.”

According to Sr Deirdre, who was herself taught by the Mercy nuns, firstly the book encourages readers to “Pay Attention – connect by talking to each other instead of emailing, tweeting or Facebooking.”

Secondly, she said it asks people to “Move Your Gears Forward – be grateful for the sacrifice and support that has been given to you and take time to pray.” 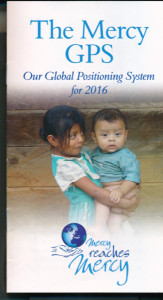 “Thirdly, move in a direction that will nurture the global citizen within you. Fourthly, take delight in the good fortune of others. Fifthly, move with courage and integrity, and lastly, Watch out, emulate the life of Jesus.”

Deirdre Mullan RSM has served as the executive director of Mercy Global Concern at the United Nations for more than 10 years.

In 2011, she became the Director of the Partnership for Global Justice, a network of over 125 small congregations at the UN.

Her present ministry is working with UNICEF to look at ways in which they can partner with religious communities.

During the height of unrest in Northern Ireland, Sr Mullan spent 25 years as a teacher and administrator in schools, where she saw first-hand what hate and misinformed ideologies can do to young minds.

She has a doctorate degree in the Feminisation of Poverty and has long been active in promoting the education of girls.