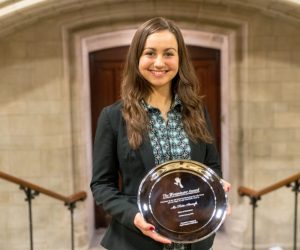 Katie Ascough, the former President of UCD Student Union who was ousted last year by a student referendum, has been awarded the Westminster Award for Human Life, Human Rights, and Human Dignity at the Palace of Westminster.

The Award recognises the extraordinary and notable work and achievements that safeguard the dignity and right to life of human beings. The winner is chosen by the Chair of the All-Party Parliamentary Pro-Life Group, and the Trustees of the UK charity, Right To Life, having taken advice from senior Parliamentarians in both Houses.

Katie Ascough was impeached last year as President of the University College Dublin Student Union for refusing to publish material in the freshers’ magazine about abortion, which she had been told by lawyers was illegal.

The award was given to Katie Ascough for her “integrity, her courage, and her public witness in favour of a liberal and open society, and the equality and right to life of unborn children,” Fiona Bruce MP, Chair of the All-Party Parliamentary Pro-Life Group told the gathering. “She is a very brave and intelligent young woman, and I know that her virtues will stand her in good stead for a successful life and a great witness to the humane and civilising principles that have informed, and must more greatly form, the political culture and laws of the United Kingdom and the Republic of Ireland, including respect for the dignity and rights of unborn children.”

Lord Alton, senior member of the All-Party Parliamentary Pro-Life Group, said that Ms Ascough’s example would inspire many to “stand for the rights of all the vulnerable, and insist on the space and liberty to work on campus or in medicine with a clear conscience according to their best moral principles”.

“If we want to live in a truly liberal and diverse society, then we must accommodate even minority moral viewpoints,” he said, calling for advocates for “protections for all members of the human family to have the freedom to live and work in accordance with their passion for justice”.

Ms Ascough said she was accepting the award “not only on behalf of myself, but on behalf of all students and right-to-lifers more generally, who suffer unjust discrimination because of their beliefs, in the teeth of bigotry and illiberalism from abortion advocates on campus or in wider society”.

I urge such people to stay strong, and to follow the courage of their convictions. It may be difficult, but ultimately, I can assure them, it’s absolutely worth it, she said.

Previous recipients of the award have included Chen Guangcheng, a Chinese human rights lawyer who challenged the country’s one-child policy, and Magnus MacFarlane-Barrow, co-founder of the charity Mary’s Meals.