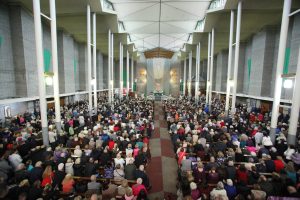 7/10/2018: Archbishop Diarmuid Martin celebrated mass for the last time in one of the largest churches in the Diocese. Pic by John Mc Elroy.

According to The Irish Times, Dublin City Council has approved the demolition of one of Dublin’s largest churches: The Church of the Annunciation on Cappagh Road, Finglas. The church announced demolition plans three years ago, saying the vast building was no longer needed for its reduced congregations. The deteriorating concrete and steel structures also make the building’s upkeep unaffordable and pose a considerable safety concern.

The church which was built in the 1960s to accommodate almost 3,500 people will be replaced by a smaller building seating about 350. The rest of the land is intended for about fifty senior citizens’ homes and a neighbouring site of substantial size, known as St Fergal’s Field, is set to be sold.

In October 2018 Archbishop of Dublin Diarmuid Martin celebrated the final Mass in the church. The application to the council for the demolition and rebuilding of a new, smaller church and parish centre was sent in May 2019. However, permission was delayed by more than eight months due to concerns over the “sparse information in relation to the intended future use of the remaining part of the site” that would be left over after a church one-tenth of the size of the original was built.

The letter from the council also raised concern over St Fergal’s Field being retained as an “existing functional open space, eg school playing fields”. In response the parish said that the field had been derelict for many years and had become subject to “anti-social behaviour”.

Representatives of the parish are in “advanced negotiations” with Dublin City Council to buy part of the church’s grounds and St Fergal’s Field. While St Fergal’s Field would have been able to accommodate more than 100 apartments, a welcome initiative in the midst of a housing crisis, it is understood that the council has had to drop these aspirations due to issues with access to roads and potential local opposition.