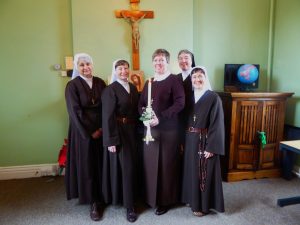 Both the Poor Clares in Galway and the Adoration Sisters in Belfast are celebrating the arrival of two new members to their respective communities.

New postulant Gráinne McElwee, a finance graduate from Northern Ireland, who worked with the Council for Catholic Maintained Schools (CCMS) in the diocese of Down and Connor, joins novice and former BBC journalist Martina Purdy as well as former lawyer Elaine Kelly.

Meanwhile, in Galway, the Poor Clares have been celebrating 375 years in the city as well as the arrival of new postulant Sr Clare Marie of the Holy Trinity.

She cannot be identified as the community wish to give the young woman “the fullest possible freedom” to discern her calling.

According to the Poor Clares, the reception ceremony for Sr Clare Marie of the Holy Trinity was “very moving”.

“It is always touching to witness the generous self-offering, as a person gives themselves over to the Lord in love. A particularly poignant part of this ceremony is when the person’s hair is cut, symbolising their consecration to God, in imitation of the way St Francis cut St Clare’s hair.”

The Poor Clares trace their roots back to Venerable Mary Ward (1585–1645), the Englishwoman who founded the Loreto Sisters and the Congregation of Jesus. In Gravelines in Flanders she made her very first foundation for an English-speaking community of Poor Clares in 1609.

That seed has survived down four centuries to the Nun’s Island community in Galway.

Last Thursday, Pope Francis celebrated Mass for the Feast of the Presentation of the Lord and commemorated the 21st annual World Day for Consecrated Life.

In his homily, the Pope told consecrated women and men that they have inherited a hymn of hope from their elders. 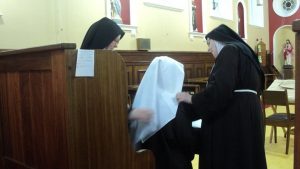 Urging religious men and women to take up the dreams of their elders, “so that we can prophesy in our day and once more encounter what originally set our hearts afire”, he said this attitude would make them fruitful.

“Most importantly, it will protect us from a temptation that can make our consecrated life barren: the temptation of survival. An evil that can gradually take root within us and within our communities.”

He warned that the mentality of survival “makes us reactionaries, fearful, slowly and silently shutting ourselves up in our houses and in our own preconceived notions. It makes us look back, to the glory days – days that are past – and rather than rekindling the prophetic creativity born of our founders’ dreams, it looks for shortcuts in order to evade the challenges knocking on our doors today.”

The Argentinian Jesuit continued, “A survival mentality robs our charisms of power, because it leads us to ‘domesticate’ them, to make them ‘user-friendly’, robbing them of their original creative force. It makes us want to protect spaces, buildings and structures, rather than to encourage new initiatives. The temptation of survival makes us forget grace; it turns us into professionals of the sacred but not fathers and mothers, brothers and sisters of that hope to which we are called to bear prophetic witness.

“An environment of survival withers the hearts of our elderly, taking away their ability to dream. In this way, it cripples the prophecy that our young are called to proclaim and work to achieve.”