Delegation of bishops describe Gaza as “a shocking scandal” 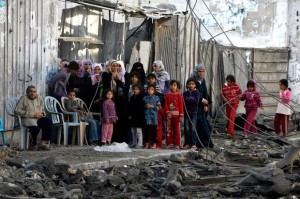 A delegation of international bishops has described Gaza as “a shocking scandal” and an “injustice that cries out to the human community for resolution.”

The visiting bishops make up the 2014 Holy Land Co-ordination which met from 12 to 16 January.

In a statement issued on Thursday, the delegation described Gaza as “a man-made disaster” and they called on political leaders to improve the humanitarian situation of the people in Gaza, assuring access to the basic necessities for a dignified human life, the possibilities for economic development, and freedom of movement.

They expressed the hope that the visit of Pope Francis to the Holy Land would “reinforce hope in the region.”

They reported that in “the seemingly hopeless situation of Gaza, we met people of hope. We were encouraged by our visit to tiny Christian communities, which day after day, through many institutions, reach out with compassion to the poorest of the poor, both Muslim and Christian.”

“We continue to pray for and support the priests, religious and laypeople working in Gaza. They exercise a ministry of presence, care for disabled children and the elderly, and teach the young.”

The bishops said that the faithful in Gaza’s testimony of faith, hope and love “gave us hope.””

“This is precisely the hope needed at this moment to bring peace, a peace that can only be built on justice and equity for both peoples. Palestinians and Israelis desperately need this peace.”

Referring to the Cremisan valley, they highlighted how the route of the security barrier threatens the agricultural land held for generations by 58 Christian families.

“The current peace talks come at a critical time. Now is the time to ensure that the aspirations for justice of both sides are fulfilled,” the bishops said.

“We urge public officials to become leaders of hope, not people of obstruction. We call upon them to listen to the words of Pope Francis, who recently said to the Diplomatic Corps: ‘The resumption of peace talks between Israelis and Palestinians is a positive sign.'”

The Pontiff expressed his hope that both parties would resolve, with the support of the international community, “to take courageous decisions aimed at finding a just and lasting solution to a conflict which urgently needs to end.’”

The delegation concluded their statement by saying that as they left the Holy Land, the bishops and people of the local Church “remain in our hearts.”

“They are not alone. Together with them we are people of hope. We pray that the visit of Pope Francis to the Holy Land will reinforce hope in the region. We believe a lasting peace is possible.”

The Christian community of Gaza is made up of around 2,500 Christians, of whom Catholics number just under 200, out of a total population of over 1.5 million.

After celebrating Mass at the Holy Family parish in Gaza and meeting the parishioners, the Bishops met with Religious Sisters and Christian agencies, visiting projects for the disabled and deaf and vocational training of young people. They also offered their support to the Christian schools and hospitals at the service of all in Gaza.

Time and again, the Bishops were thanked for their visit to Gaza as the people urged Christians across the world not to forget them, to pray for them and support them however they could.

Following the two-day visit to Gaza, the bishops met representatives of Israeli civil society in Tel Aviv before going on to Bethlehem, Ramallah and Jerusalem.

There, they heard from senior Palestinian negotiators on the peace process, before meeting with students from Bethlehem University.

They listened to the young people’s experiences of day-to-day life in this divided land, following the encouragement of the Mayor of Bethlehem to all Christians to come on pilgrimage and meet Christian families, “the living stones” of the Holy Land.

On Wednesday 15 January, the Bishops visited Schmidt School in Jerusalem, which educates Palestinian girls, and heard about projects focusing on youth empowerment.

They also visited the Cremisan Valley where the planned route of an Israeli security wall threatens the land and livelihoods of 58 Christian families based in the Bethlehem area.

Families who will lose their land as a direct result of this wall, called for urgent intervention with building scheduled to start imminently. Their testimony brought home the fragility of their continued presence in the Holy Land and the urgency of their pleas for international support.

Following meetings with His Beatitude, Patriarch Fouad Twal, and the Apostolic Nuncio, Archbishop Giuseppe Lazzarotto, Mass was celebrated for the golden anniversary of Catholic Relief Services.

The Holy Land Co-ordination concluded with a visit to the Armenian Patriarchate, following prayers and Mass.

The Co-ordination of Bishops’ Conferences in support of the Church in the Holy Land was formed in 1998 at the request of the Holy See.

It is more simply called the Holy Land Co-ordination. Each year they come at the invitation of the Assembly of Catholic Ordinaries of the Holy Land.

The Bishops who took part in this year’s Holy Land Co-ordination were: