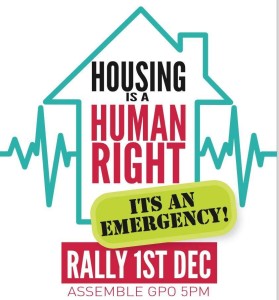 Declare homelessness an emergency, Peter McVerry urged the Government at the demonstration on housing and homeless crisis at the GPO in Dublin on Tuesday evening (1 December).

Several hundred people attended the protest organised by the National Homeless and Housing Coalition on the first anniversary of  the death of Jonathan Corrie, who was found dead in a doorway on Molesworth Street near Leinster House last December.

Forty families were being made homeless each month last year and this year it has risen to an average of 73 families a month Fr McVerry said.

“Homeless families will end up having to sleep in Garda stations and hospital emergency departments for Christmas,” he added.

Statistics from the Dublin Region Homeless Executive show that 2,100 adults and almost 1,300 children are accessing emergency accommodation every night. An extra 175 beds have been opened for the winter months.

Focus Ireland also spoke out and said that while  Environment Minister Alan Kelly said this time last year that homelessness would be top of the Government agenda, in the past year, the homeless crisis has deepened.

A worrying trend is that sleeping rough is rising in Cork, Limerick and Galway.

“The Government hasn’t done everything in their power. Local authorities, because they have been run down over many years, seem incapable of gearing up to deliver that housing as quickly as we need. NAMA is building 20,000 houses in the next number of years, 2,000 next year. If those were social houses we would solve the housing crisis,” he said.

Focus Ireland also stated that one of the most significant changes in the face of homelessness in recent years has been the number of families losing their homes.

An average of 70 to 80 families lose their homes every month in Dublin alone, and the key reason is they can’t afford the rent increases.

“The significant thing for Focus Ireland is that the number of families in emergency accommodation has doubled (since the same time last year)” said Mike Allen.

“Each year it doubles and while the Government has done a lot of things in this area, and they’d be right to say that, but they haven’t done anything which would give me reason to believe that it is not going to double again.”

He added that the insecurity faced by people in emergency accommodation is an enormous strain.

“The first thing they think of every morning when they wake up is about booking their bed for that night. They all have to phone in on the same system and they have that insecurity.”

The charity emphasised the importance of helping those families who are still in their home and hanging on “by their fingernails”.

The two-year rent freeze recently announced by the Government might slow the rent spiral, stated the charity, but thousands of families are still burdened with the rent rises of up to 30% during the last two years.

They need an increase in rent supplement to reflect this or else they will to lose their homes.